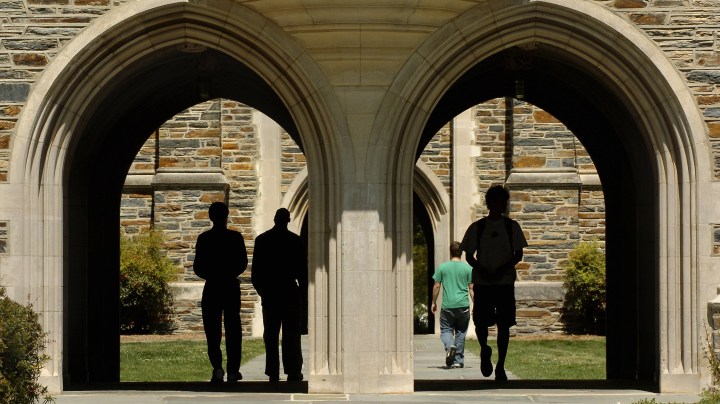 COPY
The dean of the Fuqua School of Business at Duke University said there were 13% fewer international students in the U.S. last year. Above, the Duke University campus in Durham, North Carolina. Sara D. Davis/Getty Images
Workplace Culture

The dean of the Fuqua School of Business at Duke University said there were 13% fewer international students in the U.S. last year. Above, the Duke University campus in Durham, North Carolina. Sara D. Davis/Getty Images
Listen Now

Leaders from 50 of the most prominent business schools in the country have signed an open letter to the Trump administration and Congress warning that current immigration policies and rhetoric could hurt the economy in the long term. The letter says the United States does not have the high-skilled workers businesses need to continue to grow and innovate and calls for policy changes to better fill that gap.

The letter makes the case that business schools are on the front line of the next generation of innovators, and they’re seeing fewer international students: a 13% decrease nationwide last year, according to Bill Boulding, dean of the Fuqua School of Business at Duke University and head of the Graduate Management Admission Council.

“The concern is if you see a decline in talent flowing into the U.S., then that’s going to have negative long-term implications in terms of the ability to create jobs and the ability to be economically competitive,” Boulding said.

He said these students fear they won’t be able to stay and work in the country after they graduate due to uncertainty over H-1B visas for international guest workers with specialized skills and higher education.

Industries that rely on high-skilled talent, like technology, have said for more than a decade that the cap of 85,000 H-1B visas per year is too strict, said Giovanni Peri, an economist at University of California, Davis. In 2004, the government reduced the number of visas awarded through a lottery system.

“Many people argue that these very strong constraints have slowed down already the growth of some of these sectors,” he said.

Research from Harvard has shown that higher numbers of H-1B visas are associated with greater innovation, as measured by new patents, and higher wages thanks to local growth in demand for goods and services where such businesses flourish.

But Ron Hira of Howard University said the system has been abused by some foreign-based outsourcing information technology service companies, which get the majority of the visas generally for lower-paid work than the big U.S.-based tech companies.

“Firms have replaced U.S. workers with H-1Bs directly, and H-1B workers can be paid a lot less money,” he said.

Hira said estimates about the deficit of skilled workers in the United States are overstated and based on flawed data, pointing to record numbers of U.S.-born science, technology, engineering and mathematics graduates in recent years and the fact that STEM wages have not increased as might be expected if there were a shortage.

Hira suggested a wage-ranking system for awarding the visas to the most highly skilled would be more fair than the current lottery system. Boulding and his fellow business school colleagues support lifting some caps on visas and awarding more to workers for “heartland” areas that are especially short of skilled workers.