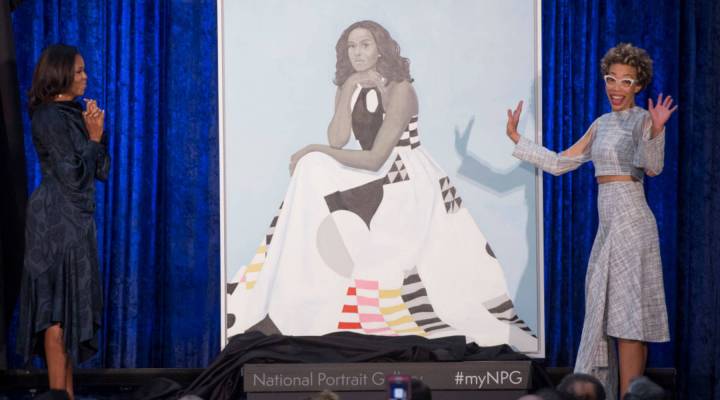 This week, former First Lady Michelle Obama’s official portrait was unveiled to much oohing and ahing at the National Portrait Gallery.

“I’m also thinking about all of the young people, particularly girls and girls of color, who in years ahead will come to this place, and they will look up, and they will see an image of someone who looks like them hanging on the wall of this great American institution,” Obama said at the presentation.

It’s already an iconic piece, painted by African-American artist Amy Sherald, and has generated a lot of buzz for the dress Obama is wearing in the portrait — a dress designed by Michelle Smith, founder of the label Milly. She spoke to Lizzie O’Leary about what it meant for her design to be chosen for the portrait.

Smith was originally contacted by Obama’s stylist, who mentioned Milly’s designs were being considered for the official portrait. Obama already knew which dress she wanted. It was part of Smith’s 2017 spring collection: a breezy, full-length, arm-revealing creation, with a black top and bold graphic print on the skirt. The retail price is around $600, which is not cheap, but a lot less than many high-end designers. Obama still got the star treatment, however. Smith had Obama’s measurements from other times she dressed her while she was first lady. She made the dress, cut it, and sent it to Washington … and then forgot about it. Then she got the news.

Michelle Smith: I was shopping in the Marais, it was the day that I’d arrived in Paris, and I just started flipping out in the jean shop, jumping up and down and screaming, and the sales lady was looking at me like I was crazy. But it was a really, really exciting moment, because I had just kind of forgotten about it for a while, you know? And then it popped back into my life in the most amazing way.

O’Leary: Tell me about the print in the skirt. I gather that there may be some inspiration from traditional quilts in there?

Smith: Yes, the print is a geometric print, which mixes rectangles, triangles and circles. And for me it’s a very modern, forward-thinking print. And some references have been made to the Gee’s Bend quilts and the women of Gee’s Bend, which I think is a beautiful reference and a very poignant reference for the print.

O’Leary: They were African-American quilters.

Smith: Yes, there’s a small community in Alabama called Gee’s Bend. And these women have been making quilts since slavery. And I believe a lot of the women descended from one particular plantation in the area, and they passed on their quilt-making tradition for generations. They’re really, really beautiful quilts.

O’Leary: What were you trying to convey message-wise with this dress, or what message do you think it conveys when you see it in the portrait?

Smith: I think that the dress really does show the personality of Mrs. Obama. In the dress, when I’m looking at the portrait, it just shows her beauty, her inner beauty, her intelligence, her realness. And yeah, I think that because the dress is made of a simple fabric but she’s in a very regal pose and you’ve got this big sort of swath of fabric, that it looks very grand, the way that a first lady should. But I do love that touch of realness that is so Mrs. Obama.

Former President Barack Obama looks at the portrait of his wife, former First Lady Michelle Obama, after it was unveiled at the Smithsonian’s National Portrait Gallery on Monday.

Smith: It is. I think perhaps she chose me because I am a little more affordable and I’m, if you will, a bit more democratic price point. And my clothing is made in the USA; it’s made in New York City, which I think is also a really nice point, to be wearing an American designer. And to be wearing a female designer. I think it’s great that the first lady, her portrait was painted by a woman and she’s wearing a dress created by a woman. I think it’s a very special thing.

O’Leary: All right, I’m a business reporter, I got to ask you — you know, you have designed for many high-profile clients. And certainly Mrs. Obama has worn your label before, but I’d imagine this is going to be pretty good for business.

Smith: I think so. Oh, my gosh, I can’t believe the press we are receiving on this. I mean, I do believe it because this is the most amazing thing that can happen to a designer. And it’s such an honor. But yes, I mean, oh, my gosh, I’m receiving a lot of attention. Milly is receiving a lot of attention. It’s a really exciting moment, and I’m just so honored. It’s hard to speak. I’m so honored.