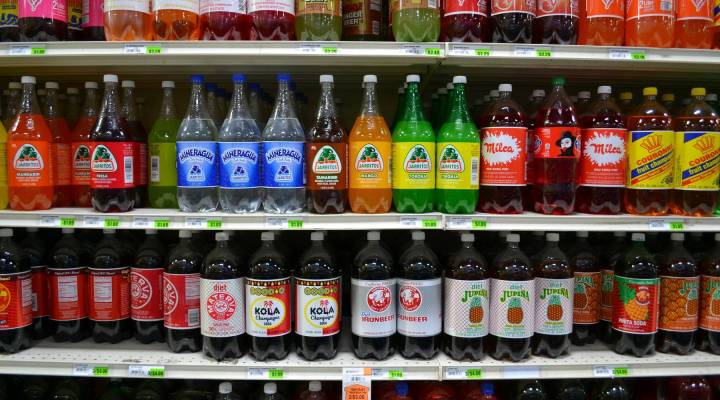 COPY
Soda selection at one grocery store in Miami. Wilson Sayre/ for Marketplace

Soda sales by the big four brands— Coke, Pepsi and their diet counterparts — are down and have been going down for some time. But that could spell opportunity for smaller, regional brands trying to make their way into the U.S. market, like the Cuban soda Ironbeer.

Diandra Blanco, head of marketing for the beverage maker, works alongside other third generation Blancos at Ironbeer. Her grandfather started out as a salesman and worked his way up the company ladder. Eventually he saved up enough to buy the company.

“In reality our biggest market are the elderly Cuban families that came from Cuba, migrated, drank it in Cuba, they came to Miami, they saw it here,” Blanco said. And as Cubans have moved to places outside of Miami and the Latino population in Florida has grown, Blanco says their business has also grown.

The sweet soda tastes like root beer without the sassafras bite. And on the drink’s can, below the image of a shirtless muscular man flexing his arm is the pronouncement: Since 1917.  So Ironbeer just passed the 100-year mark. It was once sold from the back of a horse-drawn cart in Cuba, then it came to Miami after the Cuban Revolution. Ever since it made the journey across the Florida Straits, the marketing strategy has been simple –  nostalgia.

Jake Beniflah, founder of the Journal of Cultural Marketing Strategy, said that’s a smart move for brands like Ironbeer.

“It definitely activates the feeling of nostalgia, the feeling of your country of origin,” he said. And that can increase sales and loyalty. He likens the soda industry to the beer industry — pushing towards craft and unique stories behind brands. Regional sodas including those historically from outside the U.S. like Ironbeer or Mexico’s Jarritos and Topo Chico fit into that.

“What some of the larger companies with big distribution systems can do is take those brands, plug them into a national system, and they know they’re going to have a set of consumers who are really interested in them, will buy them and most importantly, are willing to pay a premium price for them,” said Duane Stanford, executive editor of Beverage Digest.

And that starts to help the bottom line of companies like Pepsi and Coke, where sales of their flagship sodas are on the decline, hitting 30-year lows in 2016. The beverage giants have started to make inroads with smaller regional brands already. Coca-Cola for example, purchased Mexican sparkling water, Topo Chico, earlier this year for $220 million.

Ironbeer has considered the possibility of going national one day, Blanco said.  First, an update to its image. Soon, the company plans to roll out a can that says: “More than 100 years.”