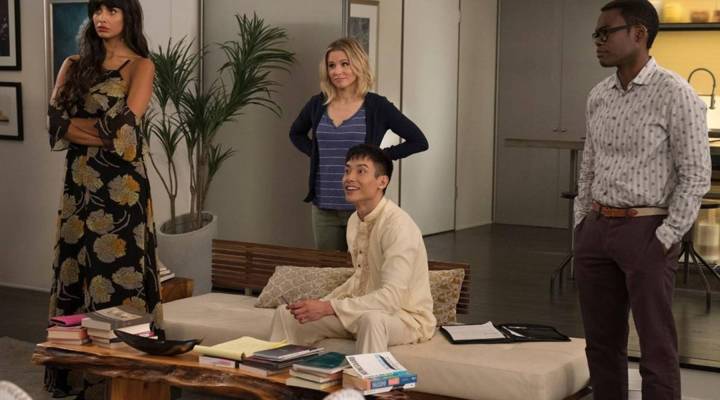 For those of us who keep an eye on the good old broadcast television calendar in this age of streaming and on demand, some favorite shows have started coming back from their winter hiatuses. On that list is NBC’s “The Good Place,” back to continue its second season.

The sitcom was created by Mike Schur, who you might know from his other work, like “The Office,” “Parks and Recreation,” and “Brooklyn Nine-Nine.”

Marketplace host Kai Ryssdal talked to Schur about how he created “The Good Place” and what he thinks about the era of streaming and on demand. The following is an edited transcript of their conversation.

Kai Ryssdal: I should have said “welcome back” because we had you on like five-ish years ago, when “Brooklyn Nine-Nine” started.

Ryssdal: Do anything much since?

Schur: Brooklyn is still going, we just passed our 100th episode. Although, we celebrated with our 99th episode, which is fun. You get it?

Schur: And we just put the finishing touches on the second season of a show called “The Good Place,” which is on NBC, which is my current, sort of, main project.

Ryssdal: So, “The Good Place,” which is why I thought to speak with you. Were you just sitting around one day and said, “so let’s do a show about this utopia kind of place with a girl who shouldn’t really be there shows up and we’ll cast Kristen Bell and Ted Danson.” Is that the way that happens?

Schur: If only it were that easy. The way it happened was I spent – after “Parks and Recreation” which was my last show ended – I drove around LA and just existed in the universe and observed a lot of annoying behavior, as you do. People cutting you off in traffic, and people throwing things on the ground and not picking up after themselves. And I had this game I played with myself where I would just say, “that’s negative eight points.” Like if anyone was keeping score, what you did right there, sir, cutting me off in traffic, you just lost eight points. And I started thinking about a world where actions have actual point values that can be measured and analyzed and broken down and that led me to the afterlife and I thought what if it’s a game and the people with high scores get into the good place and people with the lowest scores get into the bad place. One thing led to another, and then I came up with this idea that a woman who wasn’t great gets into that great place and sort of unfolded from there.

Ryssdal: Because there’s been like a book keeping error.

Ryssdal: When you finally came up with your pitch, because you’re Mike Schur of “Parks and Rec” fame et cetera, et cetera. I imagine people said: “Yes, please come do the show with us.”

Schur: Well you’re very kind to say that. The actual situation was when “Parks and Recreation” ended, NBC asked me to do another show for them and sort of promised me that I could kind of skip the line as it were and just get a show on the air.

Ryssdal: “So, the answer to your question Kai, is yes.”

Schur: Yes. Yeah. They basically said “we’ll just give you a 13-episode guarantee,” which is a very rare thing and I felt very fortunate. And so, I’m a hard worker, I would say, so I spent a lot of time crafting the idea because I want it to not feel like I was taking advantage of their generosity.

Schur: Until recently, that was the case. But the way that the world is moving in part because of Netflix, Amazon, Hulu – and it used to be that you did that many episodes in a season because there is this mad dash to 100. One-hundred was the magic number to get to syndication. Now it’s less. The syndication market kind of doesn’t exist, what does exist is Hulu and Amazon and Netflix. So, they don’t care how many episodes you have they just pay you per episode. So, it’s less important that you do so many so quickly. It’s more important that you make them good.

Ryssdal: You are a showrunner, is that the right word?

Ryssdal: Well except that means you’re a made man, right?

Schur: [laughs] That’s right. If you so much as threaten me a bunch of other showrunners will show up.

Ryssdal: How do you learn how to do that?

Schur: From someone who’s already doing it. There’s no other way – or there’s a sort of sink or swim aspect to it. I mean, TV creation is the only world where you can literally not have ever done it before and then one second later you’re in charge of a – basically a corporation with about 150 employees.

Schur: Sometimes it works out really well and sometimes it’s not so good. But in my case, I learned it by watching Greg Daniels and just seeing like, here’s what he did and here’s how he does it. And, by the way, it’s appropriate for this show because it’s not just a creative enterprise, it’s an economic enterprise. You are in charge of your budget and you need to make decisions about what you value and how much you value it and you have to fight for more money and you have to make deals and there’s a lot that goes on that, sort of, you learn only by doing it.

Ryssdal: That’s so funny, you have to fight for more money. I always just imagined that the for-profit land is like, here have as much money as you want!

Schur: No, no, no. No, the opposite. They are trying to minimize the amount of money that they spend on your product. And, by the way, let’s take for example like a hiatus week. So, you shoot four or five episodes in a row, then you have a built-in hiatus week where the writing staff can sort of regroup and regenerate, and you have a little more time to relax. Those hiatus weeks are expensive because you have to pay to hold your crew across that week. So, those hiatus weeks are several hundred thousand dollars of money that’s just being thrown away – not thrown away given to the crew to hold them.

Ryssdal: But not productively, yeah.

Schur: Right. So, what happens when they want to cut costs? Well, they start saying, “do you really need that hiatus week, or can it be three hiatus days?” So, you have to know everything about the way the economics of the show work, in order to be able to fight for the territory that you really need.

Ryssdal: How do you feel about TV right now? There’s this whole peak TV thing, and so much content, and so many opportunities for content providers to get stuff out. What’s your sense?

Schur: It’s great for people like me. It’s great for consumers because they have more options than ever, and everything is on demand. The question that I have, and I think that everybody has, is the growth sustainable? I mean, we’ve gone from 150 shows were eligible for the Emmys, I don’t know 10 years ago or something, it’s now over 500.

Schur: And that’s just scripted. Forget about unscripted documentaries, Netflix is making movies now – there’s all sorts of entertainment options that didn’t exist 10 years ago. I mean, we don’t have time – none of us have time to watch all of the TV. If you read reviews of TV now, you say “like well there’s probably 30 shows that people are saying this is a wonderful, amazing, incredible show that you have to watch now.” None of us have time for that in our lives, so I don’t know whether we can keep growing this fast.