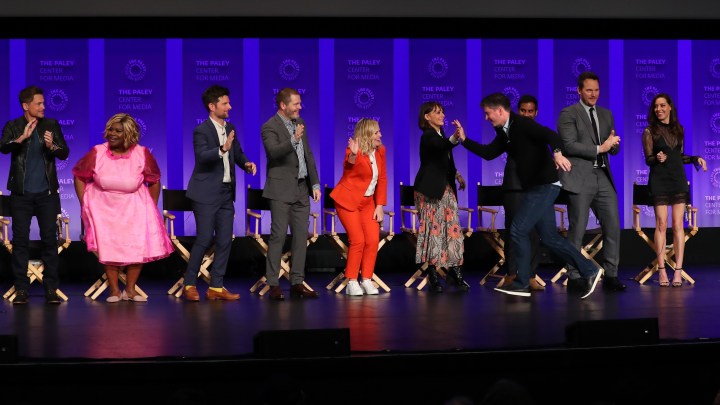 COPY
Michael Schur with Amy Poehler, Rashida Jones and the rest of the "Parks and Recreation" cast in 2019. JB Lacroix/Getty Images
COVID-19

Michael Schur with Amy Poehler, Rashida Jones and the rest of the "Parks and Recreation" cast in 2019. JB Lacroix/Getty Images
Listen Now

Tomorrow night, Leslie Knope and crew are returning to television for a special episode of “Parks and Recreation.” Marketplace host Kai Ryssdal spoke with Michael Schur, the co-creator of “Parks and Rec” as well as shows like “The Office” and “The Good Place,” about making a special entirely from home.

NBC asked whether the cast of “Parks and Recreation” would reunite for a table read, and Schur proposed they instead do an original episode as a fundraiser. “Everybody was really happy to essentially volunteer their time,” Schur said. “I’m really happy that we were able to do it, and I’m even happier that we’re doing it for a good cause.”

To make the special, the writers and crew were all working remotely, and the actors filmed themselves in their respective homes. Schur said the entire process was challenging.

“For people who are used to working on TV shows, which are enormous, collaborative efforts involving hundreds of people in dozens of different departments, it’s not even an option, really,” he said. “Looking to the future, it’s hard to imagine how we make anything, really.”