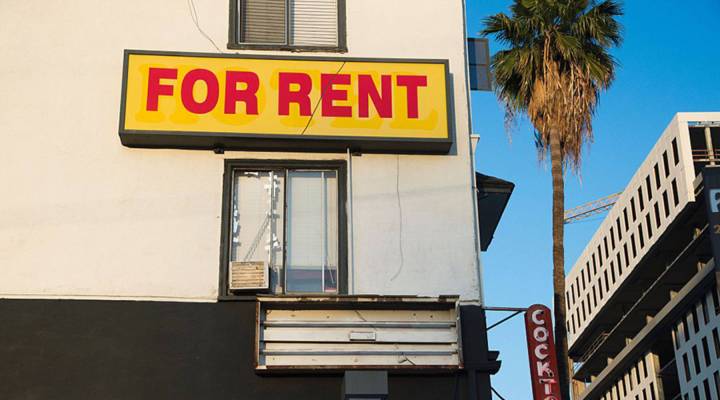 COPY
A "For Rent" sign is seen on a building Hollywood, California, May 11, 2016. ROBYN BECK/AFP/Getty Images

A "For Rent" sign is seen on a building Hollywood, California, May 11, 2016. ROBYN BECK/AFP/Getty Images
Listen Now

For years, 63-year-old Aminta paid around $1,000 for a 2-bedroom apartment in Huntington Park, south of Los Angeles. It was fine until Aminta’s husband and primary breadwinner was deported, to Tijuana. Then came the rent increases.

“My landlord raised my rent last year by $125, and when the building was bought out by new landlords this year, they increased it by $250 more,” Aminta said. “It’s difficult for me to pay $1,375 because I don’t have enough money left for food and bills.”

There are no rent control laws in her city. Landlords can jack up rents however much they want. I’m not using Aminta’s full name because she’s scared her landlord might retaliate, and raise rents again on her and her daughter, who has autism and special needs.

As more cities face ever-increasing rents and concerns over gentrification and displacement, tenants’ rights groups are increasingly pushing rent control as the solution. California is set to be a big battleground for the issue this fall. In November, voters in the state will consider a ballot measure to repeal a law that prevents cities from putting rent caps on most housing.

“The only policy solution that’s going to tackle displacement is some form of controlling skyrocketing rents,” said Amy Schur, state campaign director for the Alliance of Californians for Community Empowerment. ACCE is one of several groups pushing to overturn the state’s rent control law, which taken together, will spend tens of millions of dollars convincing voters.

Cities use rent control laws to keep monthly payments down for tenants and protect them from eviction. Most California cities don’t have them. And the state law in question prevents those that do, like LA, from regulating rents on newer apartment buildings, single-family homes and condos. Less than 20 percent of the state’s rental units currently fall under some rent control, state analysts say. More than 60 percent would be eligible if the law changes.

“We’re just getting rid of a bad law that put restrictions on what cities could do to deal with rent gouging,” Schur said. “It’s going to be up to local cities to decide what regulations they want.”

About a dozen California cities have plans to expand rent control. The California Apartment Association, which represents the rental industry, has lined up $60 million to convince voters to stop those plans.

“We just fear this is going to add fuel to an already difficult situation in California,” said Debra Carlton, who handles PR for the landlord group.

Carlton says if the repeal passes, property owners will be tempted to convert their rental units to condos. Investors and developers may also build fewer apartments, making California’s affordable housing crisis even worse.

Mathew Millen owns 3 apartment buildings in Santa Monica, a city that has some rent control regulations and is proposing to expand them if the state law is overturned.

“If that all passes, I’d probably consider selling out,” Millen said.

Millen lives in one of his units, next to a tenant who’s been there 25 years and, thanks to rent control, pays well below the $2,700 market rent.

Rent control policies usually save some lucky renters money, but can drive up rents for everybody else. Most economists agree that price ceilings on rents reduce the quality and quantity of housing.

“The fundamental problem is that there are just not enough housing units to go around,” said Jim Costello, an economist at Real Capital Analytics. “You limit the supply, and the price goes up.”

Stanford researchers found that San Francisco’s rent control law led to landlords taking 15 percent of rent-controlled units off the market. That triggered a 5 percent increase in rents citywide, beyond inflation, over a period of 17 years.

Some worry the same thing will happen across the state if the law changes.

“You open the door for municipalities to adopt not just rent control, but very draconian rent control that could limit the ability and desire to build more housing,” said Bob Hart, CEO of TruAmerica Multifamily, which owns about 7,000 apartment units across California.

Polls show 60 percent of California voters favor limits on how much landlords can charge, but adopting rent control is easier said than done. In the past 30 years, just two California cities managed to approve new ordinances, while voters and city leaders have rejected rent control measures in many more.