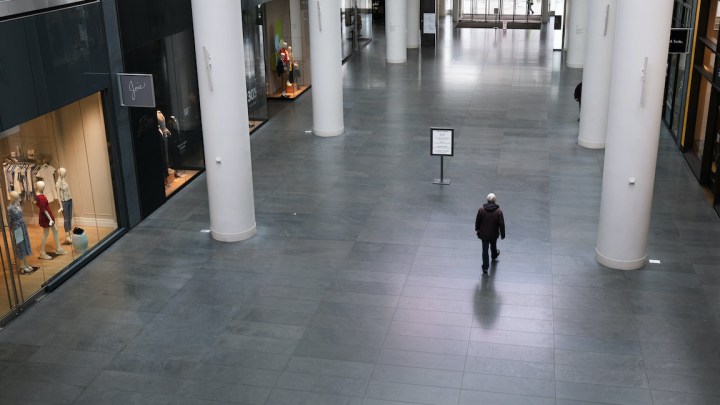 They could kick the retailers out. That’s not ideal, said Douglas Bregman, a managing partner at Bregman, Berbert, Schwartz & Gilday who also teaches at Columbia Law School. “The landlords have a dark space in their shopping centers,” he said.

They could sue their tenants for rent, but often that’s a dead end, Bregman said.

Simon Property Group, owner of many malls and several distressed retailers, decided to make deals instead. In commercial real estate, it’s a somewhat common practice to base rent, at least partly, on a retailer’s sales. “It’s not all sales. It’s sales above what’s called a break point,” Bregman explained.

The retailer usually pays a minimum rent. Then if its sales hit that break point, say $1 million, it gives the landlord a cut, a percentage. Bregman said, “You know, typically in the neighborhood of, say, 7%.”

In its earnings call Monday, CEO David Simon said that over the past year, Simon Property Group agreed to lower many of its tenants’ base rents if they agreed to lower that break point.

David Auerbach, an institutional trader with World Equity Group, said Simon was essentially saying, “We’re betting on you to recover, but because we’re giving you this little lifeline, when you hit your certain level, we’re going to be coming with our purse open, expecting our share of it as well.”

It means that as the economy recovers and retailers’ sales increase, Simon could see big payouts. It has been tying its fate to its tenants.

“I’ll take it a step further,” Auerbach said. “It’s tying its fate to the recovery of the entire industry.”

And to consumers. If you think about it, Simon has already been making this bet in another way. During the pandemic, its investment group snapped up several distressed retailers, including Brooks Brothers, Lucky Brand Jeans and, just this month, Eddie Bauer.