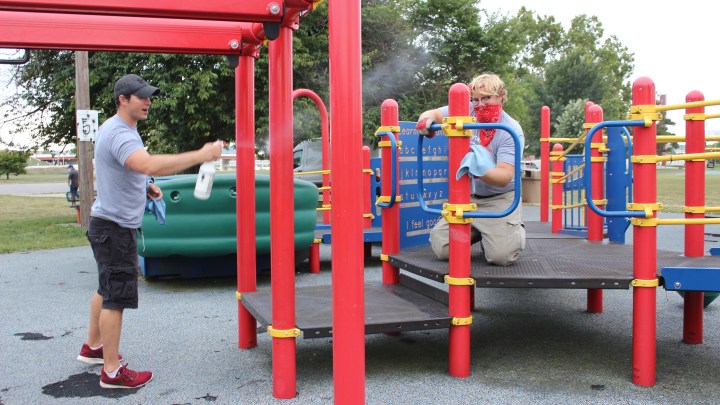 COPY
A two-person crew sprays down the playground at McIntosh Park in Dayton, Ohio. The city expects to spend $60,000 this year just on sanitizing playground equipment. Leila Goldstein
COVID-19

A two-person crew sprays down the playground at McIntosh Park in Dayton, Ohio. The city expects to spend $60,000 this year just on sanitizing playground equipment. Leila Goldstein
Listen Now

On a fall Saturday at John Bryan State Park in Southwest Ohio, the Weinkauf-Arnold family looked like a group of hiking pros ready for an adventure. The five kids spotted tadpoles in a river, climbed onto big rocks and hiked past a waterfall.

But the truth is, this is relatively new for the family. Their once-busy schedule of school and dance practices came to a halt when the pandemic hit. Mom Wendy Weinkauf-Arnold wanted to find a safe way for her kids to get out of the house.

“This year compared to others is just completely different because this is not something that I would have been able to schedule for them,” she said.

Now, her kids are asking to get outside.

The family was not alone. The trail was dotted with groups of people — some masked, some not. Cooped-up Americans across the country have escaped to the great outdoors following the shutdowns early in the pandemic. The state of Ohio said it has seen a dramatic increase in visitors to state parks since March.

This kind of intensive use can take a toll on green spaces, and parks need to be maintained to keep them from deteriorating.

“Because it’s being done, perhaps, outside of the view of the typical user, they’re not realizing somehow, magically that lawn is getting mowed or somehow that trash is being emptied,” said Kevin Roth, vice president of research, evaluation and technology at the National Recreation and Park Association.

Looking back at the past, he said parks budgets were very slow to recover after the Great Recession.

“Really only in the last year or two had [parks and recreation departments] basically been able to recover back to their pre-recession levels,” he said. “What we are seeing now is just this dramatic cut in budgets resulting from the dramatic cuts in local government tax revenues.”

While the public has found ways to shake off cabin-fever by going to local parks and green spaces, parks and recreation agencies are facing significant funding cuts. In Ohio, funding for state parks was reduced by over $2 million, according to Stephanie O’Grady, a spokesperson for the Ohio Department of Natural Resources.

Parks departments, including those in urban areas, are now facing added costs because of the pandemic. In Dayton, Ohio, the city expects to spend $60,000 this year just on sanitizing playground equipment, according to Dayton’s director of public works, Frederick Stovall.

On a weekday in September, a two-person crew at McIntosh Park sprayed down a picnic area using a pressure washer, scrubbed down slides and monkey bars with a degreaser and even used battery-operated spray guns to sanitize swing sets.

Weston Sale had recently joined the crew, and said he was surprised this kind of cleaning didn’t happen more often. After a week on the job, he said he had witnessed “a lot of gross” things.

“We’ve gone through a whole box of rags right now and they started blue and they ended up black,” he said.

Meanwhile, Dayton has had to cut over $7 million from capital projects, including a $1 million plan to enhance the city’s parks, according to the city’s director of procurement, management and budget, Diane Shannon. Most of Dayton’s playground equipment is 20-plus years old.

Kimberly Burrowes, a training and technical assistance specialist with the Urban Institute, said communities of color and low-income neighborhoods nationwide have less access to parks. Research from The Trust for Public Land found that parks serving mostly nonwhite populations are, on average, half the size and nearly five times as crowded as parks serving mostly white populations.

“The parks that do exist there [in low-income communities and communities of color], we find that they have not been maintained as well, or they lack the operating budget to continue ongoing maintenance and operation support,” she said.

Burrowes said the COVID-19 budget cuts could make parks even more inequitable, especially in smaller cities that have to cobble together funding. The National Recreation and Park Association found in a survey that more than half of parks agencies in the country have already been asked to reduce spending.