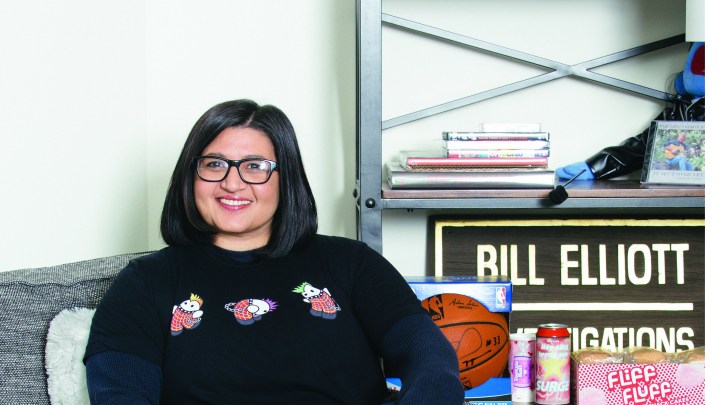 COPY
Sitcom writer and producer Nahnatchka Khan. "I think we'll be able to laugh at the way that we adapted to our lives being turned upside down," she says. Annie Tritt
COVID-19

Sitcom writer and producer Nahnatchka Khan. "I think we'll be able to laugh at the way that we adapted to our lives being turned upside down," she says. Annie Tritt
Listen Now

While Hollywood has been in flux due to the pandemic, television production has continued where it can — just not necessarily in Southern California. That’s why, for her newest series, “Young Rock,” co-creator Nahnatchka Khan went Down Under.

The series, which retells actor-producer Dwayne “The Rock” Johnson’s life story, was filmed last fall in Australia, a new experience for Khan. Though she’s a comedy vet and the creator of shows like “Fresh off the Boat” and “Don’t Trust the B—- in Apartment 23,” filming during the pandemic was also foreign territory for her.

Khan spoke to “Marketplace” host Kai Ryssdal about making “Young Rock” as well as the post-pandemic future for comedy. The following is an edited transcript of their conversation.

Kai Ryssdal: You’re trying to do this in the middle of a pandemic. You wind up going offshore. You go to Australia. How big of a deal was that for you?

Nahnatchka Khan: It was pretty big. I mean, I personally have never been to Australia, let alone shot anything in Australia. So we had the two weeks of quarantine, which was very intense, but I’m so grateful that we were able to go down there and make this show.

Ryssdal: Following onto that, you know, you’ve got many other irons in the fire. And we’re not out of this pandemic yet. What’s your production model? I mean, how big a deal is this for you just for everything else you’re trying to do?

Khan: I mean, it’s very challenging. I think that everybody’s figuring it out. And of course, it affects the bottom line because you have all these safety protocols in place and costs that you never had before. But of course, it’s worth it to keep everybody safe. And you know, to keep the machine running.

Ryssdal: Do you think it’s ever gonna go back to normal?

Khan: I don’t know. I honestly, I don’t know if it’s ever going to go back to the way it was where people were just freely kind of moving around and coming in and out. I think it’s always gonna be a little bit different.

Ryssdal: I’m just letting that hang there because I kind of can’t wrap my head around it. But I guess the interview has to go on. I want to talk to you about you for a second because you’re the writer-director, you’re the creator, you’re the person who can do it, but also run the show. It’s like Mike Schur and Shonda Rhimes, right? Which is pretty elevated company. Why do you think you all are what Hollywood is looking for right now?

Khan: Well, I’m flattered to be put in the company of those two. There’s a whole process that goes into greenlighting different projects. And of course, you know, the fact that they believe in the stories I want to tell, and they support that, you know, I find myself just in a very lucky position.

Khan: Well, I mean, I think that the more opportunities that we have to center those people, the sections of society that you mentioned that have not been centered before, the better we all are for it. Just because we haven’t seen these stories on television or in movies doesn’t mean that they haven’t happened, right? It doesn’t mean that they don’t exist. So the idea that we now have opportunities and platforms, think of all the stories out there that we don’t know about yet. And those are the things that get me excited.

Ryssdal: Why comedy for you?

Khan: I mean, to me, it’s just always what I’ve gravitated towards. I think that any message that you want to deliver, I personally am able to do it when it’s wrapped up in something that’s amusing and interesting. That’s just the way my mind works.

Ryssdal: So here’s the tricky last question to a comedy person: Do you think we’re ever gonna be able to laugh about the past year that we’ve had? Are there comedies coming out of this pandemic, do you think?