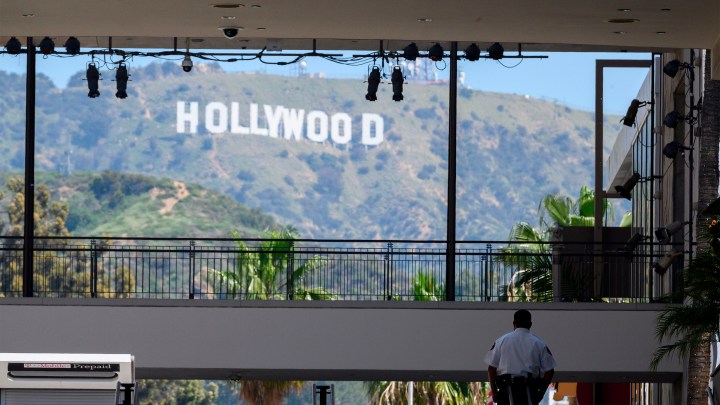 COPY
Hollywood producers are developing shows that involve the coronavirus pandemic. Some wonder how to strike the right tone. Robyn Beck/AFP via Getty Images
COVID-19

Hollywood producers are developing shows that involve the coronavirus pandemic. Some wonder how to strike the right tone. Robyn Beck/AFP via Getty Images
Listen Now

A virus that is not fully understood. A global pandemic. Countries shutting down.

A few months ago, this would have sounded like a not-so-creative Hollywood movie. But now, it’s real life. Several major production houses have announced COVID-19 themed shows — about love, loss and social distancing.

But does anyone want to watch that?

Netflix has just signed on for a series called “Social Distancing” produced by Jenji Kohan, creator of “Orange Is the New Black.” And Disney’s cable channel Freeform plans to produce a romantic comedy called “Love in the Time of Corona,” filmed using remote technology.

But Hollywood is divided, according to Peter White, television editor at Deadline Hollywood magazine. He said creators are unsure that audiences will show up to watch what they’re already living through.

Tone, meaning do you make a comedy about a pandemic?

This is not the first time Hollywood has had to figure out how to keep Americans entertained through rough times. During the Great Depression, films showcased Shirley Temple, Fred Astaire and Ginger Rogers tap-dancing into American hearts.

But Emily Carman, associate professor of film at Chapman University, said that in those hard times, Americans also wanted to see films about underdogs, working-class heroes and gangsters.

“There was an allure with those kind of outlaw-rebel figures,” Carman said.

Like, the original “Scarface” — it was graphic and controversial, but people loved it. Now, Hollywood is forced to innovate again. The few productions moving forward will be inventing a genre with some pretty experimental, untested technology.

And, we will see how it goes.