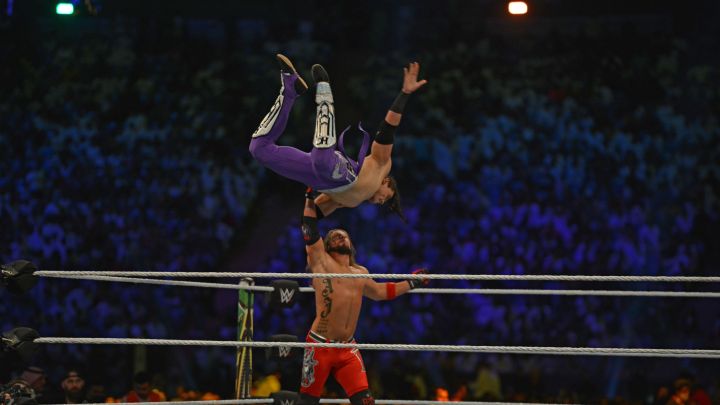 Let me take you back to the 1990s, a time when Dwayne “the Rock” Johnson rocked a full head of hair. The Rock wore very tiny shorts. And The Rock spoke about himself in the third person. This was professional wrestling at its peak.

Back then, wrestling was a cash cow.

“In dollars adjusted for inflation to today, [World Wrestling Entertainment] made about $80 million in net income in their two best years,” said Brandon Thurston, host of the podcast Wrestlenomics, which focuses on money in wrestling.

These days, wrestling is nowhere near as popular as it was in the 1990s.

But it has the loyal and passionate fanbase streaming platforms covet, and it is having a renaissance, with networks like NBC and TNT pumping in money and getting major celebrity cameos. NBC’s Peacock recently paid a reported billion dollars for exclusive streaming rights to World Wrestling Entertainment — that’s WWE. They’re betting that wrestling can find a new audience.

Although depending on who you are, you never went away. Brandon Ross, a media analyst at LightShed Partners, remembers the glory days of WWE.

“When I was a kid, I was jumping off the couch, landing on my brothers, and like, imitating all these guys,” Ross said.

He gets why Peacock is spending money on WWE. It’s a new service in need of viewers, and WWE is still a sure bet: Its audience is notoriously devoted and active on social media.

“Even on television, ratings are down significantly, but they’re still gathering an audience of a couple of million viewers per episode,” Ross said.

Still, ratings have been steadily declining. Stars like The Rock and John Cena have pursued other careers, and haven’t been replaced by new icons. Wrestling, once a staple of American pop culture, is considered low brow and out of touch by many these days. You could also argue it’s an arena for some of the most sincere expressions of class anxiety in America. Scholars attempting to understand alienation among working-class Americans in recent years might want to check out this speech by The Rock, calling a live WWE audience “unintelligent trash” who toil day after day in minimum-wage, 9-to-5 jobs.

But a lot of the old WWE stuff is inexcusable — racist, sexist, homophobic. In fact NBC recently scrubbed some of the more offensive material off the platform.

The thing is, when you buy a product like WWE, you do know what you’re getting, said Charles Schreger, who teaches entertainment business at New York University.

“They have a core audience that really does want to see that library. Good, bad or indifferent, they want to see it in an uncensored version,” he said.

But that also could alienate potential new viewers coming in through Peacock.

Which might be why the major wrestling networks have also been pumping money into new high-profile guests — people who will bring in fresh audiences — like the Puerto Rican rapper Bad Bunny.

Not to be left behind, All Elite Wrestling, which is WWE’s competitor on TNT, also debuted a new star last month:

But does any of that mean more Americans can fall in love with wrestling like they did in the 90s?

Correction (April 9, 2021): An earlier version of this story misstated bracketed information in a quote from Brandon Thurston. It should read World Wrestling Entertainment.