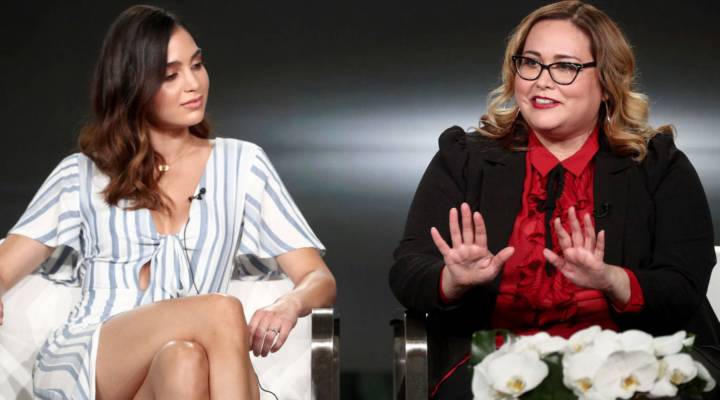 Tanya Saracho is the creator and showrunner of the Starz original scripted drama “Vida,” which centers around two Mexican-American sisters who return to east Los Angeles after their mother dies. While preparing to put the final touches to an episode with her editor, Saracho reflected on how all this was made possible, thanks to a meeting with Marta Fernandez, the senior vice president of Original Programming at the Starz network. “To have an executive who was Hispanic was amazing, ‘cause you don’t go into these meetings and see, you know, people like you,” she said.

There was something else Saracho appreciated about Fernandez and the Starz network’s approach: the honesty about the kind of talent they were looking for.  “They wanted a Latina and there are not a lot of Latina showrunners, you know, Starz is sort of nurturing them.”

Marta Fernandez said the decision to work with Saracho wasn’t just because of her race and ethnicity — it was a business decision. “It was really the beginning of the network identifying that underserved audience and the shows that were programmed to them, like “Power” and “Outlander” that were working very well for us.”

In fact, producing shows that targeted underserved audiences — including women — turned into a ratings win for the network.  According to Starz, “Power,” which is executive produced by Curtis “50 Cent” Jackson and stars African-American actor Omari Hardwick, reached 4.7 million multiplatform viewers in its first season. By season four, the audience almost doubled to 9.3 million, making it the second most watched show on premium cable — behind “Game of Thrones.”  Fernandez said it made sense for the network to double down on this winning approach.

“We wanted to look at the next group that doesn’t have real programming for them on premium cable. And of course, Latinos being the fastest growing demographic in this country, that was our obvious next target,” she said.

Darnell Hunt, the dean of Social Sciences at UCLA and the co-author of the annual “Hollywood Diversity Report,” said that the TV landscape is changing, albeit slowly.

“Some networks, you know, they look now like they did five years ago, and then others like Starz are doing a really good job at diversifying their content … they got the memo that this is where audiences are now. I mean, the American public is nearly 40 percent minority.”

But, there’s another reason for TV’s change of heart: the internet.

Nancy Wang Yuen, author of “Reel Inequality: Hollywood Actors and Racism” said the internet has forced TV executives to pay attention to content that doesn’t stick to the same old narratives and characters.

“YouTube is now where the entertainment industry is finding new talent. [They’re thinking] why cast a new actor, [if] we don’t know if he or she is going to hit … why not cast someone who already has a great following? And so, what’s exciting about YouTube is that some of the biggest actors on YouTube are people of color … and a lot of them are women of color as well.”

Like Lilly Singh aka “Superwoman.” Singh’s channel has over 13 million subscribers and featured big name stars like Dwayne “The Rock” Johnson. Singh’s also a star in her own right, with appearances on “The Tonight Show with Jimmy Fallon.”

While YouTube has an influence on the entertainment industry as a whole, TV has the edge over its big screen counterpart when it comes to producing inclusive content. According to Darnell Hunt, this is because “… the barriers to entry are a little lower. We had like 1,200 or so TV shows in our [“Hollywood Diversity Report”] database. That’s 1,200 opportunities for people to get involved, whereas you’re only talking about a couple of hundred films.”

This, even though some of the most profitable movies of recent times have been created by and starred people of color. Films like the Oscar-nominated “Get Out” which has made $250 million to-date, and the comedy “Girls Trip,” starring Tiffany Haddish, which made over $140 million worldwide — and who can forget Marvel’s “Black Panther”?

Darnell Hunt pointed out there’s another reason for the movie industry’s reticence. “Ever since the Great Recession in the mid-2000s, Hollywood was making something like 30 percent fewer major films, and as we’ve seen throughout the history of this country, when there is less of something happening, the people who tend to have the hardest time breaking in, are people of color and women.”

He added that change will require a restructuring of the movie industry, where there are people of color and women in decision making positions.

The good news is that on the TV front at least — and specifically for Tanya Saracho and her team on “Vida” — it looks like that’s already happening. Saracho worked hard to create a team that consisted of people who have typically been shut out.

“We have an Afro-Dominican, a white Chilean, we have indigenous Salvadoran; we have diversity in the room, and also, half of the people in the room are queer. When you go to my set, my first and second ADs [assistant directors] are female and my second ADs are Latinas. It just happened; it wasn’t like it was a mandate, [we just thought] ‘hey, be mindful, just look a little further to see if you can give access to these people.’”