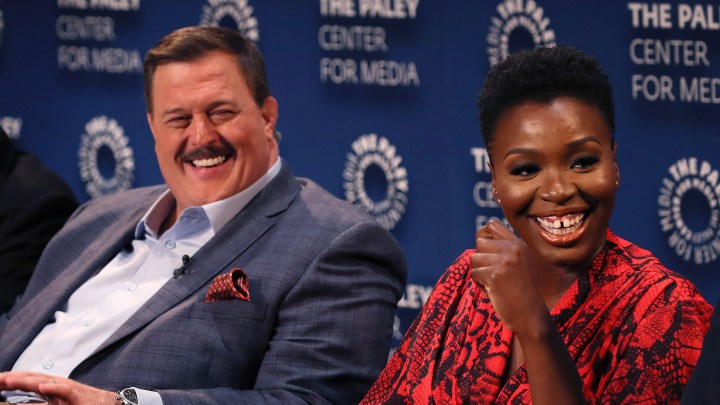 Fall is here and with it comes a new season of primetime TV shows.

In the past, the major networks have been criticized for issues around racial diversity and representation, but the needle has been moved with shows like ABC’s “Black-ish” and the NBC hit series “This Is Us.”

This year CBS is continuing its expansion of inclusion on screen, just three years after heavy criticism for launching six new shows — all with white men in leading roles.

This fall most of the five new shows on CBS feature black actors in leading roles, including “Bob Hearts Abishola,” a comedy about a white American man who falls in love with his Nigerian nurse. The audience will also hear the lead character speak the Nigerian language Yoruba.

This comes on the heels of the network releasing several shows last year with a diverse casts, including “The Neighborhood” a comedy about gentrification, which is back for a second season. Tichina Arnold plays Tina Butler and said she enjoys working on a show that promotes greater cultural understanding and diversity. “We found a happy medium to be able to incorporate those things and present it on a major network.”

For the show’s creator Jim Reynolds, offering a nuanced take on an issue like gentrification all starts in his writers’ room — one of the most diverse he said he’s worked in. “Making sure inclusion is a primary value on our show, really I think is the way to make sure that this is an issue that’s examined from multiple perspectives because it is a very complicated issue.”

For Reynolds and Arnold, tackling diversity is about changing hearts and minds. For the big TV networks, it’s also about making money, which traditionally happened by attracting a large — predominantly white —audience.

“I know that both internationally as well as U.S. minorities, the buying power is over $3 trillion,” said Tiffany Smith Anoa’i, the executive vice president of entertainment diversity, inclusion and communications at CBS.

And those dollars come from advertising, streaming, digital platforms —and marketing opportunities.

“You cannot make a TV show that’s not diverse,” said Darnell Hunt, co-author of UCLA’s annual Hollywood Diversity Report, which is in its sixth edition. “The majority of babies born in America today are people of color. And that’s been true for the last four or five years.”

This is a fact that can’t be ignored because, Hunt said, “you’re talking about not only your current market, but your future market.”

Which means for the major networks, diversity both on screen and behind the scenes is the only option.