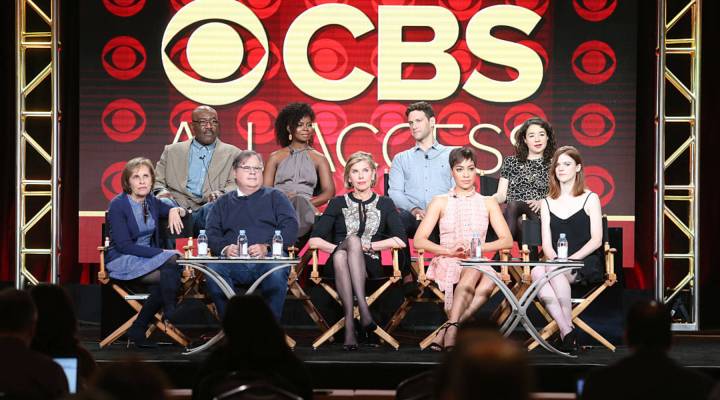 COPY
The cast of "The Good Fight" and the show's executive producers at the 2017 Winter Television Critics Association Press Tour. Marc DeBevoise, president of CBS Interactive, says CBS All Access has more than a million subscribers. Frederick M. Brown/Getty Images

When the other three major television networks invested in Hulu, CBS decided to tackle TV streaming on its own with CBS All Access.

CBS All Access isn’t new — it’s been around since 2014 — but only this year it launched its first original scripted series: “The Good Fight.”

“The Good Fight” is buzzy and critics like it, big wins in a world where there’s more TV than anyone can keep track of.

Marc DeBevoise, president of CBS Interactive, said the service has more than a million subscribers. That’s small compared to Hulu’s 12 million, but DeBevoise said CBS still feels good about its decision not to put all its streaming eggs in the Hulu basket.

“I think one of the things that’s happened to many of the networks that have joined it from the beginning is that people think in show brands rather than network brands,” DeBevoise said. Going it alone keeps people thinking CBS.

“The next 50 years of television, you’ll still be looking for the CBS brand out there,” DeBevoise said.

There’s another explanation for CBS’s confidence: its ratings.

“CBS has some of the most popular programs on broadcast,” said Deborah Jaramillo, a television studies professor at Boston University. Popular, she said, and exactly the sort of shows people want to stream.

“Because they are so episodic, so their procedurals and their multicam sitcoms will have long lives in traditional and streaming re-runs,” Jaramillo said. Think “The Big Bang Theory” and “NCIS.”

CBS gets more than subscribers and their $6 a month from All Access. It gets data. A lot of it.

“Seeing what different viewers watch, how much different viewers consume,” said Amanda Lotz, a media studies professor at the University of Michigan. And that data is valuable, both to share with advertisers about what the audience cares about, and with the main network, looking for a show that might be the next big hit.