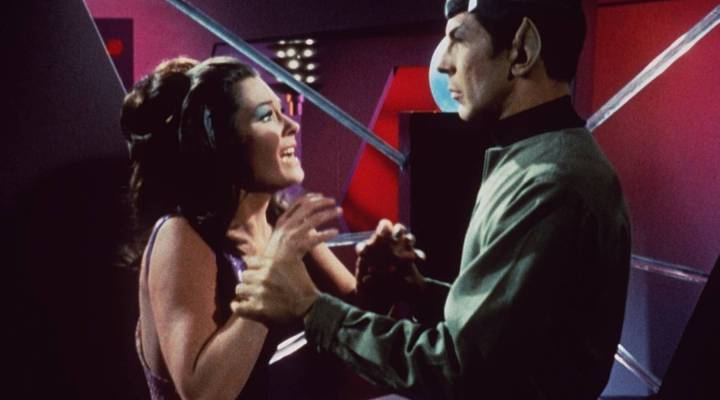 COPY
Netflix also has the rights to all 727 episodes of "Star Trek," including the original series. Getty Images / Handout

Netflix also has the rights to all 727 episodes of "Star Trek," including the original series. Getty Images / Handout
Listen Now

“Star Trek” fans held up their hands in a Vulcan salute when they heard that CBS was developing the new series “Star Trek: Discovery.” The show will premiere on Sept. 24 in two places — neither of them on broadcast nor cable television. If you want to watch, you will either have to subscribe to CBS All Access or Netflix. (Only those outside of the U.S. will be able to watch it on Netflix.)

It’s a unique business model in two ways: CBS isn’t traditionally broadcasting the series and episodes will be released simultaneously on Netflix. That means viewers won’t be able to binge watch “Discovery” until all episodes air, which goes against much of Netflix’s streaming model.

Amanda Lotz, who teaches communications, media and the future of television at the University of Michigan, said the strategy might have something to do with how “Star Trek” fits into the CBS brand and that networks are finally learning how to adapt to the changing media landscape. An edited excerpt of her conversation with Marketplace Tech’s Ben Johnson is below.

Ben Johnson: So this is a really strange arrangement. How did it come about, in your view?

Amanda Lotz: A new edition of “Star Trek” isn’t something that fits the CBS brand exceptionally well. And that’s probably why they’re putting it on CBS All Access. This is a property that has a rabid fan base around the world. If you wait a year, a month, even a week after you air it in the U.S., you’re going to lose that audience because it’s just going to be pirated.

Lotz: In terms of their international viewership, certainly. The other thing to keep in mind though is that I think this is a very strategic and responsible move on the part of CBS to recognize that you can’t hold content back anymore in the way that you used to.

Johnson: One of the interesting things about this to me is that it’s going to stream via CBS in the U.S. weekly, which means it will also appear on Netflix weekly.

Lotz: I suspect there were significant negotiations around that point. I would not be surprised if we see some changes. So I think for the U.S. audience and in terms of Netflix originals, we’re used to always having that full season dump. But that’s not necessarily the norm around the world.

Johnson: You think it’s possible this will go in reverse? Essentially, it will start out as a streaming product and it might then go to broadcast?

Lotz: I think it’s possible. I think the true fans of “Star Trek” are going to watch it as soon as it’s available. But that might not be the best way to reach your full audience. And there are a lot of viewers who have become accustomed to watching things when they want, where they want. And if it’s available in the CBS library or in the Netflix library, its value is really about encouraging subscription to those libraries.

Johnson: Anything else about this deal that you find interesting or suggestive of where this could all go?

Lotz: This seems like a move that could force people to choose, if they don’t want to be paying for CBS twice. To me, it’s surprising that they would be using exclusive content, especially something as high profile as “Star Trek,” in this way.