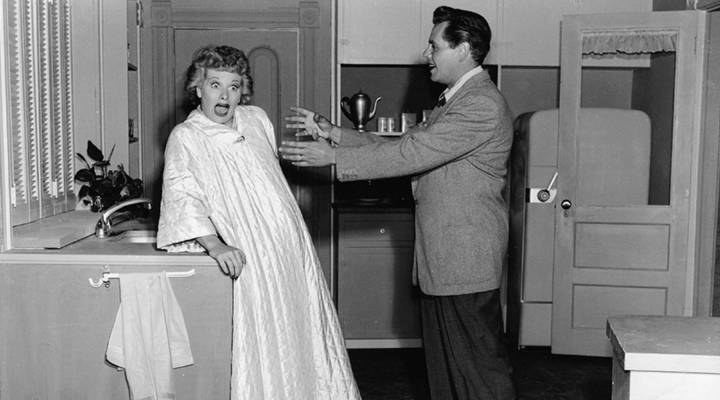 COPY
Lucille Ball and Desi Arnaz in “I Love Lucy” in 1956. The show still has earning power. Hulton Archive/Getty Images

A living room in Miami, 1999. Fifteen-year-old Alexander Ruche is walking to the kitchen to get a glass of water when his mom calls him over to the couch.  “I Love Lucy” is on TV.  She wants him to watch it with her.

He’s not into it. The show is in black and white.

So he does, and he’s immediately drawn to the character of Ricky, played by actor Desi Arnaz. “As soon as I heard the accent, you know, I was like, this guy’s Cuban. So coming from a Cuban background myself, I was intrigued,” he said.

Ruche fell in love with the show. Soon he was buying collectibles, like autographed photos of Lucy and Desi. And then he turned from buyer to seller. He started a website that sells secondhand “I Love Lucy” memorabilia — vintage Christmas ornaments, puzzles, props from the set.

There are lots of websites like Ruche’s. They sell “I Dream of Jeannie” calendars and “Bewitched” comic books. And these decades-old sitcoms still have devoted fans who are buying this stuff. That’s because these shows never really went away. First, they stayed alive through reruns. Then in 1985, they got a boost when Nickelodeon created a primetime block of oldies television.

Fred Seibert was a consultant for Nickelodeon at the time, and he’s one of the guys who pitched the idea.

“We thought this was a no-brainer,” he said. “Oldies radio had worked. Why wouldn’t oldies television work?”

Some of the network’s executives were skeptical. Reruns weren’t exactly exciting.

“It was like, ‘Ugh, God, reruns.’ I said, ‘No, no, no. Reruns! Oh boy, reruns!’” Seibert said. Nick at Nite was a hit. And soon it added more shows to the lineup, like “I Love Lucy,” “Bewitched,” and “The Brady Bunch.” Its success led to more retro programming, like TV Land and MeTV. They kept these shows alive. Now it’s easier than ever to watch classic TV shows on streaming services like Hulu and Netflix.

And the networks that own the rights to these shows are still cranking out merchandise. CBS, for instance, just launched a “Brady Bunch” board game and Lucy figurines.

Lately, CBS has been marketing Lucille Ball as an icon. She was a pioneer — a working mother who ran a prime-time show in the ’50s.

“All of that’s still very relevant today,” said Veronica Hart, who runs the network’s licensing division. “And we’re seeing that young women in particular are gravitating towards her because of that.”

“I Love Lucy” superfan Ruche hasn’t made that much, but he’s doing all right.