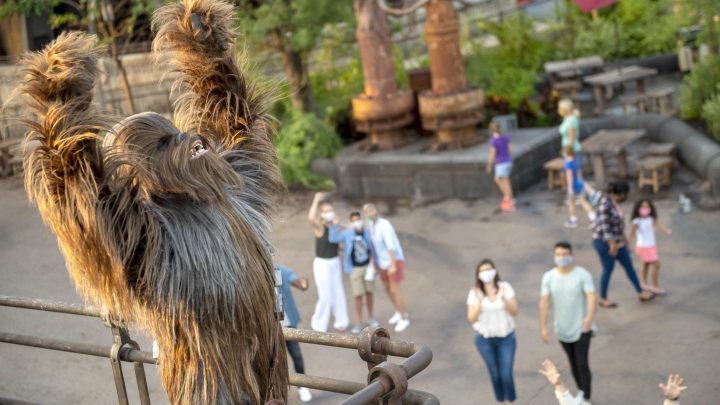 COPY
The interest in live events and theme park tickets has skyrocketed as the industry receives pent up demand from the pandemic. (Photo Walt Disney World Resorts via Getty Images)

The interest in live events and theme park tickets has skyrocketed as the industry receives pent up demand from the pandemic. (Photo Walt Disney World Resorts via Getty Images)
Listen Now

In the face of an economic downturn, luxuries like a Hulu or Netflix subscription may be the first thing to get cut from the family budget. Over the last two years, nearly a fifth of streaming subscribers have cancelled three or more subscriptions.

This doesn’t spell great news for the bottom line of advertisers or these platforms, but subscriptions aren’t the only revenue stream here. Instead, Hollywood is banking on live events and theme parks to make up the difference.

Alex Weprin, a media and business writer at The Hollywood Reporter, joined Marketplace’s Kai Ryssdal to talk about the pent up demand for in-person experiences.

A transcript of their conversation is below, edited for clarity.

Kai Ryssdal I’m going to jump straight to the bottom of this article, there is a great graphic which shows Disney and Comcast’s, which is Universal, obviously, theme park revenues both in the before time, and then in the pandemic, and then in the after times, and it’s almost a straight plunge down when the pandemic hits. And now, kind of amazingly, it’s bouncing back up. First of all, everybody thought this was going to happen, right? Pent up entertainment demand?

Alex Weprin Yeah, in certain respects, everyone was kind of predicting this would happen. But to actually see it happen and see the results of how quickly things came back is kind of amazing, especially because international visitors who used to make up a huge portion of theme park visitors, they’re still like, less than half what they were before the pandemic.

Kai Ryssdal OK, so here’s why it matters in an interview about streaming, and that is this: if you’re Netflix, and we all know it’s having problems and streamers are having problems all over the place. But if you’re Bob Chapek of Disney, or the guy running NBC Universal, you’ve got some protection for streaming challenges, shall we say? And that’s all in the theme parks and live events.

Kai Ryssdal And more to the point, they’ve got some pricing power. I don’t know exactly what the dollar amount is, but I know it’s a really big one. The latest Disney Season Pass ticket costs are just… Oh my.

Alex Weprin Yeah, I mean, a typical trip for a family to a Disney theme park or a Universal theme park, you’re looking at 1000s and 1000s of dollars. And in the case of ticket sales, not only do you have the admission tickets to the theme park, but these companies use the pandemic to kind of develop these new upsells.

Kai Ryssdal Go into that upsell thing a little bit because it’s not just like back when my kids were little. It’s not just like you learned how to get a FastPass, right? I mean, these are actual things you have to buy and spend money on.

Alex Weprin So Disney actually eliminated the Fastpass altogether, and they replaced it with something called Genie Plus and Lightning Lane. Now every attendee at a Disney park has to pay $10-$15 per person extra on top of their ticket price, just for the privilege of kind of reserving a time to go to one of their favorite rides. And the same thing applies to their annual passes, which they kind of completely revamped. Whereas before, if you had a Disney annual pass, you could go any day anytime you wanted. You could pop over for lunch. Now you have to reserve a visit well ahead of time, and they frequently sell out.

Kai Ryssdal So what do you do if you’re Ted Sarandos running Netflix, and you don’t have the live event or theme park option and you’re seeing your numbers and then you’ll look at the flip side of the coin? You’re like, “Oh, man, those guys, what am I going to do?”

Alex Weprin So Netflix is actually exploring live events right now. They’ve kind of soft launched a “Stranger Things” thing in New York City. There’s a “Bridgerton” live experience in Los Angeles. There’s a “Squid Game” experience coming to New York. It’s obviously not at the same scale as the theme parks, which can hold 10s of 1000s of people every single day, but it is kind of a first step in that direction. And the other thing they can do, of course, is to license that IP that they’ve developed to theme park operators and develop theme park or live event content related to it.

Kai Ryssdal So you’re thinking like a “Squid Game” thing in Universal?

Alex Weprin It’s certainly possible. Universal has a Halloween event called Halloween Horror Nights that is very adult themed that it wouldn’t be out of place to have something like that there. So you know, it’s definitely an option for them.

Kai Ryssdal What about you? Is it an option for you?

Alex Weprin I don’t know if I would do it, but maybe I’d consider it depending on what it was. As long as I could walk out of it OK.