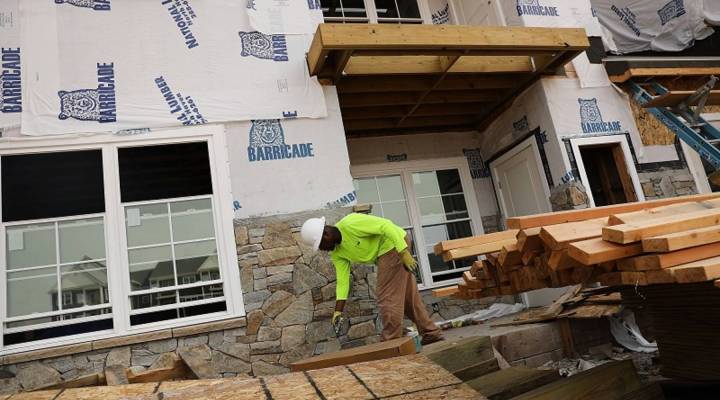 COPY
“A construction worker who's in a favored industry might end up with a lower tax rate as an independent contractor instead of working for a construction company,” says Marketplace's Kimberly Adams. Photo by Spencer Platt/Getty Images
Tax Bill 2017

“A construction worker who's in a favored industry might end up with a lower tax rate as an independent contractor instead of working for a construction company,” says Marketplace's Kimberly Adams. Photo by Spencer Platt/Getty Images
Listen Now

A lot of things factor into your ultimate tax bill: Where you live, whether you own or rent, the makeup of your family and so on. One thing that’s going to become especially important on Jan. 1 is how  you make your money — whether you’re a wage worker who gets a paycheck from your company, a small business owner or an independent contractor. Our own Kimberly Adams joined us to explain. Below is an edited transcript of their conversation.

Kimberly Adams: So this is all about pass-through businesses…. These are the types of businesses where the owners pay regular income taxes on the profits of their businesses, those profits pass through to their income taxes. And actually the vast majority of American businesses are these kinds of businesses. It’s not just like a business with workers, it can also be an independent contractor or somebody working in the gig economy — a freelancer or an Uber driver. And under this tax bill, depending on what you do, you may get a lower tax rate as an independent contractor as opposed to a regular employee.

Kai Ryssdal: Help me understand that a little bit. The whole thing about “what you do.”

Adams: Right. So under this bill, what really matters is the kind of pass-through business you’re in. Now let’s keep in mind, under the tax bill … you can deduct 20 percent of [pass-through business income], and that ends up being giving you a lower rate than the top tax rate, which is 37 percent. Ryan Alexander is president of Taxpayers for Common Sense and here’s how she lays this out:

Ryan Alexander: There’s a set of favorite business activities and disfavored business activities in the pass-through rules. And I think that there will be shifts in both of those groups if you’re in a favored activity industry. You’re going to certainly look at shifting from being an employee to being a partner or an independent contractor.

Adams: OK, so what does that mean? So, for example, a construction worker who’s in a favored industry might end up with a lower tax rate as an independent contractor instead of working for a construction company. On the other hand, if you’re a doctor or a lawyer, which landed in the unfavored industry category, it may be better for you to be a partner or owner — or maybe just relabel your business as something else entirely, like a real estate company.

Ryssdal: Let’s get back to the construction worker. If one person working construction sets him or herself up as a pass-through independent contractor, and the other one takes a paycheck from the company, you can have two people doing basically the same job getting paying different tax rates and thus taking home different amounts of money.

Adams: Yep, you certainly could. This bill has some guard rails in it to try and limit people from reclassifying themselves just for the sake of lowering their tax bill. For example, there’s an income cap on the eligible income you can have to still get that pass-through deduction. But on the other hand, Ryan Alexander says there’s probably going to be a bunch of those situations:

Alexander: I’m gonna say that if you’re a wage earner and you’re sitting next to someone who’s doing the same thing you’re doing and just paying less taxes because their job is structured differently on paper, I think you’re just going to be mad.

Adams: On the other hand, it’s important to keep in mind that as a wage earner, as an employee, you’re going to get benefits that an independent contractor will not, such as health care benefits, who knows, maybe child care [or] transportation benefits. And having been an independent contractor myself in the past, I can tell you that paperwork is absolutely no fun to do, especially when it comes to taxes. So even though it may lower people’s tax rate to reorganize their businesses or their lives, it’s not the only consideration that people are going to have.

Ryssdal: Right. And as always, consult your own financial professional.