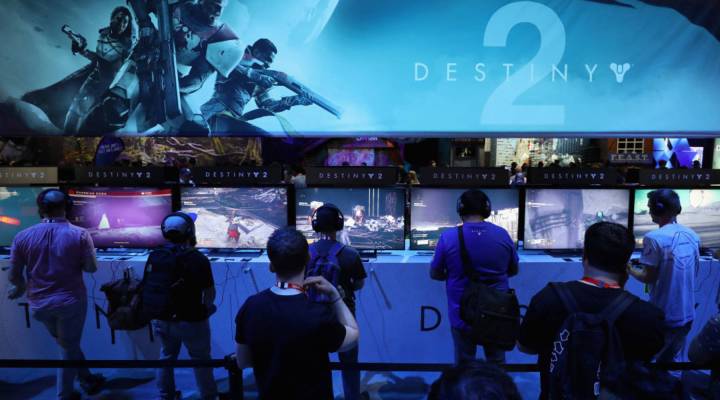 Gamers test 'Destiny 2' at the Sony PlayStation exhibit during the Electronic Entertainment Expo E3 at the Los Angeles Convention Center on June 13, 2017 in Los Angeles, California. Christian Petersen/Getty Images
Make Me Smart With Kai and Molly

It’s Explainathon time again, and while no questions technically stumped Kai and Molly, they were unsure when it came to the exact numbers on the rise of video game sales.

Marketplace listener Mark Dimor called in to ask about the gaming industry after being amazed by first-person shooter game Destiny 2’s marketing campaign this year. He said it was more extensive than anything he’d ever seen (and he made a career doing advertising for the pharmaceutical industry, which he thought could out-market anybody.) This led him to wonder: is the video gaming industry stepping up their game (his pun, not ours)?

Longtime gamer Molly said they already have. In 2015, video games pulled in more revenue than the movie and music industries, so they’re already a dominant part of entertainment. In 2016, total gaming revenue in the U.S. was $23.5 billion, jumping 5 percent from 2014. And globally, the gaming market was estimated to be worth $99.6 billion in 2016.

But let’s rewind back to 2007, when total industry revenues globally were valued at $41.9 billion, according to PriceWaterhouseCoopers data. At that time, a 10.3 percent per year growth rate was predicted, with global industry sales expected to rise to $68.4 billion in 2012. Newzoo reported $66.3 billion in 2012, with a prediction for total global revenues to reach $86.1 billion by 2016. While revenues missed estimates in 2012, growth in the past four years has exceeded analyst expectations.

So video games have been on the rise for many years now, but a lot has changed in how people play these games. There’s a fear that people will stop buying console games for $50 or $60 because it’s a lot cheaper to buy computer games for $1 or $2, according to Molly. And that’s where these astronomical ad budgets come in. They pay for the type of campaigns that spread from bus ads to Reddit to Instagram like Destiny 2’s, which Dimor called “brilliant.”

Molly said Destiny 2 spent $661 million on TV ads alone in 2016. Destiny’s developer, Bungie, has been beating around the bush about the total ad budget for the game, but one “blockbuster ad for a blockbuster game” by advertising firm 72andSunny made headlines in September. The video is below.

Also, we just want to clear up that Molly did not do voice acting for Destiny 2. But thanks for paying attention and letting us know on Twitter.

@mollywood Have you, by any chance, done voice acting for the game Destiny 2? There is a NPC that sounds similar…

Keep on submitting questions via the form on the Make Me Smart homepage.