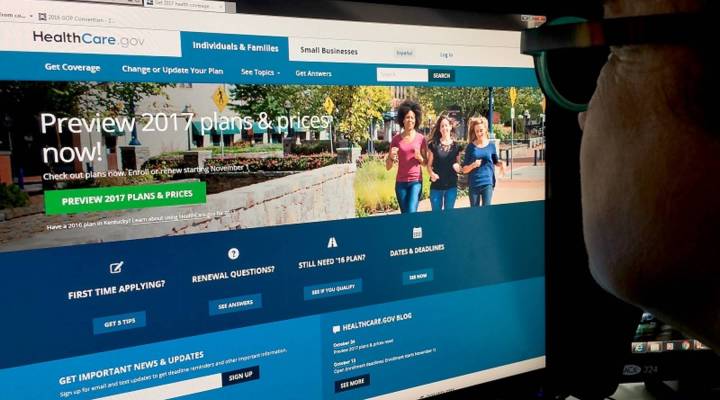 Open enrollment begins Nov. 1. It’s the time when people can buy new health insurance plans through their work or other methods, including HealthCare.gov or state-run exchanges.

The Trump administration shortened the period when people can buy health care under the Affordable Care Act to between Nov. 1 to Dec. 15. Traditionally, open enrollment has run through the end of January. And the administration gutted ad money and money for in-person enrollment helpers.

The advertising budget was reduced by 90 percent, from $100 million to $10 million.

“The cuts that have been made are going to disproportionately affect young people,” said Lori Lodes, co-founder of Get America Covered, an advocacy group focused on getting people signed up for health insurance. “They don’t have open enrollment penciled in on their calendars, they don’t know when open enrollment ends.”

Lodes ran outreach for enrollment under the ACA for the Obama administration.

“What we found out was that television was the No. 1 driver of enrollment,” Lodes said. “We really thought digital advertising was going to be most effective, but television really helped drive all the outreach channels.”

And its effects were seen across age groups. Even for younger Americans, who were increasingly turning off TV sets in favor of digital media.

“We were on a lot of sports, we were heavy in NFL Sundays and playoff baseball,” Lodes said. “So we were really taking advantage of the programming that young people would watch.”

Pinar Karaca-Mandic, a University of Minnesota professor of finance, studied Obamacare TV ads. And her findings were, well, simple.

A government memo from January backs that up. It says paid outreach brought in 37 percent of enrollments.

But the Trump administration says the government hasn’t gotten the bang for its buck it wants. The U.S. Department of Health and Human Services’ Centers for Medicare and Medicaid Services will now scrap those TV ads.

“CMS will target its advertising and outreach activities to educate consumers on the new dates of the Open Enrollment Period through digital media, email, and text messages,” said Randy Pate, a director at CMS, in an August memo.

And it’s not just ad money that will decrease.

The Trump administration cut funding for in-person enrollment helpers called navigators from about $63 million to $37 million, saying a new formula would be used to ensure accountability within the program.

Some states have seen cuts of up to 80 percent, while others have had no cuts at all. The Department of Health and Human Services did not respond to a request for comment.

Take Care Utah — the larger of two navigator groups in Utah — had its funding cut by 60 percent this year. It had to lay off half of its navigators and reduce spending on outreach.

“It was a shock, I sat there stunned,” said Randall Sehr, director of Take Care Utah. “We had a total of 16 navigators, and as soon as we got the news, we had to lay off people immediately.”

The federal government says cuts were made because navigators failed to achieve enrollment goals. They point to 17 navigators that enrolled fewer than 100 people at an average cost of $5,000 per enrollee.

Sehr said he rejects that premise. He said navigators do much more than just sign people up. They help people look at plans, teach them insurance terms and help them understand what they qualify for.

“We literally reach out to 100,000 people per year that just need questions answered,” Sehr said. “Navigators don’t just help people get to the point of actually enrolling; navigators are the people that help them walk through the process.”