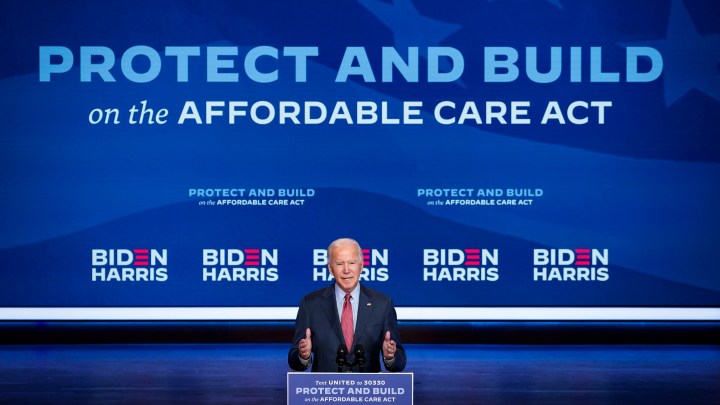 COPY
The Biden administration plans to spend $50 million on a marketing campaign to get more people to enroll through the Affordable Care Act. Drew Angerer/Getty Images
COVID-19

The Biden administration plans to spend $50 million on a marketing campaign to get more people to enroll through the Affordable Care Act. Drew Angerer/Getty Images
Listen Now

The federally run Obamacare exchange reopened Monday for a three-month special enrollment period. President Joe Biden ordered the move to get more people signed up for health care during the pandemic, especially those who have lost jobs and health insurance.

While unemployed Americans qualify for special enrollment, opening up the federal marketplace for all reduces the paperwork hurdles to get covered. The administration is also trying to reverse losses over the previous four years, when the Trump administration slashed education and outreach budgets for the Affordable Care Act.

“They also cut funding to provide assistance with enrollment, such as for health insurance navigators, who can be really instrumental in helping people learn about coverage options and navigate enrollment processes,” said Jennifer Haley, an Urban Institute researcher who has been monitoring the trend.

“When so many millions of people can get free coverage, but they’re uninsured, that to me is screaming out for outreach and enrollment assistance,” Cox said.

The Biden administration is planning to spend $50 million on a marketing campaign to get more people to sign up for health insurance through the ACA.

And, if the state of California — which runs its own health insurance exchange — is any indication, the money will likely make a difference.

Peter Lee, executive director of Covered California, said the state spends tens of millions of dollars a year on marketing and has enrolled a record number of people.

“That’s what you want in the middle of a pandemic,” Lee said, adding that enrolling more people has also lowered consumers’ health care costs in the state.

“The Biden administration, though, is digging out of an incredibly deep hole where for four years, Americans didn’t know there was the possibility of getting coverage,” Lee said.

Experts say one of the most pervasive misconceptions among consumers is around cost; many uninsured Americans believe they simply won’t be able to afford coverage and a large portion of them don’t even bother to check.

For others, there may be language barriers or confusion about whether the ACA has been repealed.

“[For] people in immigrant families, the expansion of the public charge rule to consider use of some safety net benefits in applications for permanent residence, might deter them from being interested in enrolling in public programs,” Haley said.