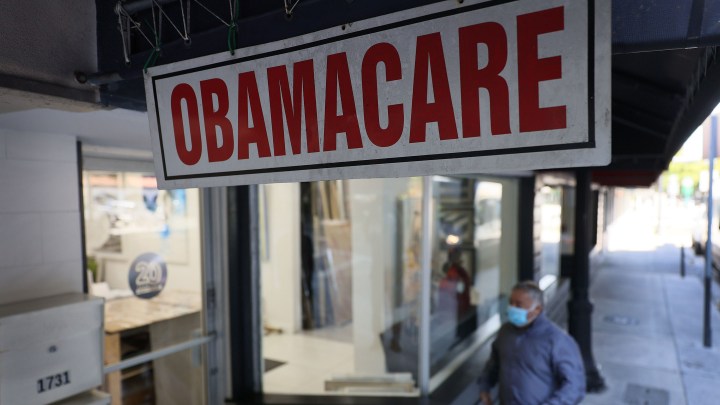 COPY
As of Monday, through May 15, people in the 36 states that use HealthCare.gov can sign up for federal insurance plans. Joe Raedle/Getty Images
COVID-19

As of Monday, through May 15, people in the 36 states that use HealthCare.gov can sign up for federal insurance plans. Joe Raedle/Getty Images
Listen Now

Normally, if you don’t have health insurance, you get one chance a year to sign up, during open enrollment. It’s usually a pretty short window in November and December.

But as of Monday, through May 15, people in the 36 states that use HealthCare.gov have another chance. The federal health insurance portal is open again, for a rare additional special enrollment period. But getting people to sign up takes more than just moving deadlines around.

The Biden Administration is encouraging states that run their own health exchanges to reopen enrollment, too.

Tara Straw at the Center on Budget and Policy Priorities said this special enrollment period is a big deal for the roughly 30 million people in the country who don’t have health insurance.

“This is a great opportunity for people to come into the marketplace and get coverage,” Straw said.

The Biden Administration is planning to spend millions on marketing and outreach to let people know they can get coverage and, possibly, help with paying for it.

“Something like two-thirds of uninsured people aren’t aware of the financial assistance that’s available and HealthCare.gov and the state-run marketplaces, so increasing consumer awareness can do a lot to help people enroll in coverage,” Straw said.

The Trump administration did very little marketing and outreach around open enrollment, and it cut way back on funding for navigators who help people sign up.

Vivian Ho, a health economist at Rice University and Baylor College of Medicine, said that help figuring out the marketplace is critical for a lot of people.

“Once you get in there and you start looking for coverage, it’s not straightforward,” Ho said. “It’s actually pretty challenging. And so you need those navigators to help walk people through.”

Restoring funding for navigators, marketing and outreach, Ho said, could make a big difference in getting more people insured.

“As we speak, the Congress is working on COVID relief legislation that, among other things, would include improvements in marketplace subsidies, extend subsidies to people who aren’t eligible now,” Pollitz said.

If those measures pass in the final relief package, Pollitz said that could also lead to a meaningful increase in the number of people signing up for health insurance.