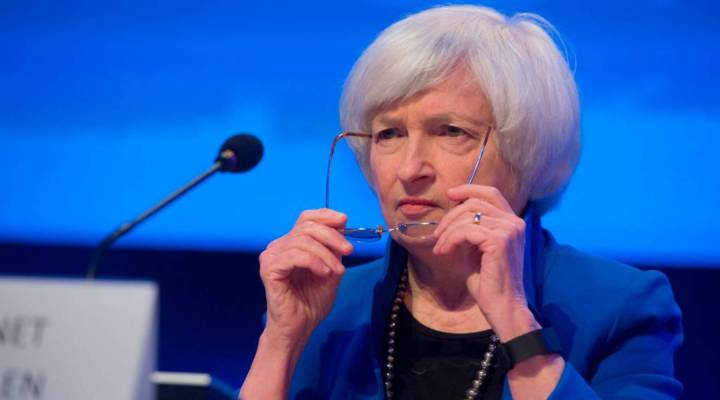 President Donald Trump confirmed to reporters in the Rose Garden that he has narrowed his search for the next Chair of the Board of Governors of the Federal Reserve System to five candidates. Trump said yesterday that he “likes them all” and will decide within a “fairly short period of time” who his pick will be.

Kai Ryssdal: So, the president says yesterday he likes everybody. Your reportage actually is that maybe he’s got some favorites on this list the five.

Ben White: He does have some favorites. I would say among that list of favorites is Kevin Warsh, also John Taylor from Stanford, and Jay Powell, a current Fed board member. I think kind of at the bottom of the list now [is] Gary Cohn the NEC director and Janet Yellen, the current Fed chair, whom he is supposed to be speaking with soon about the job. I wouldn’t completely write her off, but she’s not at the top of the list.

Ryssdal:  All right so let’s run down a couple of these. John Taylor at Stanford, extremely well-known economist and also author of this thing called the Taylor Rule, which you are now going to remind us what it is.

White: The Taylor Rule is basically following guidance to tell you when to raise interest rates, it’s using a mathematical formula to guide interest rate policy rather than the collective wisdom of the Fed Board of Governors and the Fed chair themselves. So, it’s basically kind of making Fed policy adhere to a formula rather than a decision-making process over a bunch of folks. And that’s why I think while he might like John Taylor I’m not sure that he’ll wind up being the number one candidate because as we know John Taylor is more hawkish on rates, more likely to raise rates than Yellen. Trump doesn’t really like that. And I don’t think he wants somebody who’s going to be strictly adhering to rules.

Ryssdal: Right. And this goes for anybody who gets this job, the prospect of raising rates into the 2020 election cycle.

White: Precisely. I mean, we’re obviously in a rate hiking cycle, expecting another one this year, a couple more next year. And I believe that the administration and Republicans in Congress, while publicly they say they like hawkish and conservative Fed chairs, whenever you’re running for reelection you don’t want a Fed that is trying to take away the punch bowl. You don’t want a Fed that is going to slow down your economy, particularly if you’re trying to cut taxes and get faster growth.

Ryssdal: What is he looking for in a Fed chairman?

White: I think he’s looking for someone that he has a good relationship with. He’s obviously big on personal relationships. I think he wants somebody who would be a little bit more open to more oversight of the Fed, perhaps from Congress. More openness at the Fed. He’s told people privately that he thinks the Fed is too much a power unto itself, not accountable enough. So, perhaps a Fed chair that he could influence. Although, as we know, the Fed is supposed to be set up as an independent body. So, if it’s a candidate who is strongly independent, will fiercely defend the Fed’s independence – that might not be something that Trump loves. I think maybe he wants somebody he can lean on a little bit.

Ryssdal: We have to point out here the extreme unusualness of not reappointing the incumbent.

White: Absolutely. It is historic tradition for the new president to give a sitting Fed chair, nominated by the previous president, another term. It would be breaking with historic precedent not to re-nominate Janet Yellen. And I think a lot of people are missing that and just assuming that, we have a new president, we get a new Fed chair – and that’s not the way it works. Ben Bernanke stuck around under President Obama. Typically, presidents reappoint the Fed chairs if they’re seen to be doing the decent job and I don’t know a lot of people who think that Janet Yellen is doing a bad job.

Ryssdal: Alright, let me change gears here for a minute. Big day for you, the dropping of the Politico Money podcast, of which you are obviously the host. You landed the Secretary of the Treasury for the opening day interview. And he said some stuff that’s making news. I’m going to play a piece of tape here and then I’m going to ask you about it. Here you go:

“I think to the extent we get the tax deal done in the stock market will go up higher. But there is no question in my mind if we don’t get it done, you’re going to see a reversal of a significant amount of these gains.”

Ryssdal: As the guy who was in the room, I want your sense on, as you were looking at him, what was it like when he said this was it, “Yeah you know the markets are counting on this” or was it “nice markets you got there, shame if something happened to it.”

White: Kai, it was a little bit more of the second one. You know, you pass our tax reform bill the way we want it or earmark it’s going to tank, Wall Street’s going down. And I don’t think he’s entirely wrong that there is at least some bit of hope for corporate tax reform and individual tax reform you know built into this market rally. But it’s certainly not all of it, or even the majority of it. And regardless of the factual basis of it, it’s just unusual for administration officials, Treasury Secretaries, in particular, to really talk about the market at all, whether it’s going up or down, it’s not what they do, it’s not what presidents do. But we’re in a very different time and in a very different administration. Trump tweets about the markets every day, so his Treasury Secretary feels free to say “if you don’t give us tax reform, Wall Street is going down.”