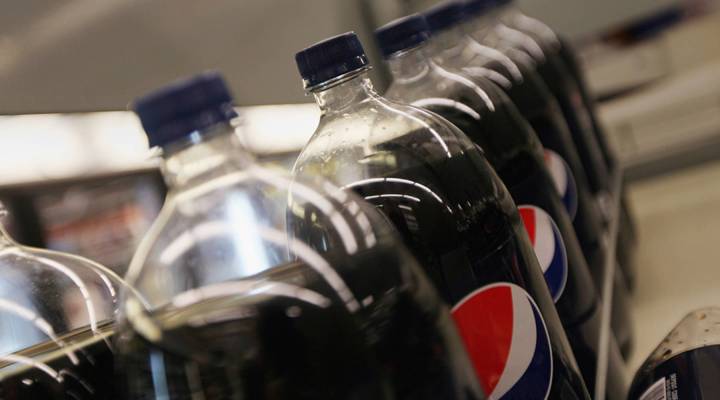 COPY
Pepsi worked with DuPont to come up with a bottle that was 10 times bigger than the classic 6.5-ounce Coke. Mario Tama/Getty Images
I've Always Wondered ...

Pepsi worked with DuPont to come up with a bottle that was 10 times bigger than the classic 6.5-ounce Coke. Mario Tama/Getty Images
Listen Now

Listener Matthew Hooks in Pittsburgh, Pennsylvania, sent in this question:

“Why are bottles of soda sold in liters but milk is sold in gallons? Both are consumable liquids, so what gives?”

Back in 1970, things were not going so well for Pepsi-Cola. Coca-Cola outsold it 10 to 1 in about half the country, according to John Sculley, who ran Pepsi from the late ’70s into the ’80s.

“We were a very distant second-tier brand to Coca-Cola,” he said. Pepsi hired Sculley back then to up the soda company’s game against Coke. Sculley said even Coke’s bottles were hard to beat. “The Coke bottle was the perfect shape for a vending machine, to go down a bottling line and not get broken,” he said. “It was a classic, very memorable design.”

Sculley said every time Pepsi tried to improve its bottle design, it always ended up like Coke’s. His first assignment was to find a way out of that problem. He started doing market research on Pepsi drinkers, and along the way, he learned that households were constantly running out of Pepsi. That led to an epiphany.

“Why are we spending our time trying to design a little glass bottle when what we should really be doing is figuring out how do we get more liquid, more Pepsi, into that household?” he said.

Sculley wanted a bigger vessel. He worked with the chemical company DuPont, which had come up with a type of plastic that was perfect for bigger beverage bottles. The result? A Pepsi bottle that was 10 times bigger than the classic 6.5-ounce Coke.

And its name, the 2 liter, reflected the nation’s flirtation with going metric. Metrication, as it’s called, was an effort to get the U.S. to abandon customary measurements like inches and pints and join the rest of the world in using the metric system.

This cultural backdrop comes through in a Pepsi ad from the era. It starts with a school teacher announcing to his class, “Today we’re going to do the metric system. What’s 2 liters?”

A student proudly exclaims, “This is 2 liters: the new returnable, resealable bottle from Pepsi-Cola!”

The U.S. has debated going metric on and off since the 1800s, according to historian Stephen Mihm, professor at the University of Georgia and author of a forthcoming book about the history of measurement systems. Mihm said metrication gained steam in the 1970s.

“That was driven by concerns in the late 1960s of declining American exports abroad,” he said. “And that got chalked up, rightly or wrongly, to our intransigence about not adopting the metric system.”

In 1975 the U.S. Congress passed the Metric Conversion Act. It didn’t mandate that companies sell their products in metric sizes but did lay out a way to convert voluntarily.

Other soda companies figured that’s where the nation was heading and got on board. During the period of metric fever, 7UP launched products in half-liter and liter sizes.

“They adopted a new slogan for this campaign called ‘follow the liter,’” said Jack McKinney, director of the Dr Pepper Museum & Free Enterprise Institute in Waco, Texas. It includes artifacts from several brands, like 7UP, which are owned by Dr Pepper Snapple Group.

McKinney said 7UP even published a 60-page guide for teachers on the metric system back in the early ’70s.

“And they circulated it through their bottlers, and the bottlers could give it to teachers in schools,” he said. “It’s quite comprehensive.”

But the effort was short lived. Protectionist forces in the U.S. prevailed, and the metric idea was dropped, as evidenced by all the stuff we don’t measure in metric units.

Sarah Brew specializes in product labeling laws at the firm Faegre Baker Daniels in Minneapolis. She said unlike a global soda brand, milk is sold locally and follows local customs of measurement.

“Going back to the days when consumers got their milk delivered by the milkman to their doors, milk has been historically sold in pints and quarts and gallons,” she said. “And that’s what consumers expect.”

So these two systems are now in play when you do your grocery shopping, and that could be confusing for consumers. That’s why Congress made manufacturers list products’ contents in both metric units and traditional inches, pounds, gallons, et cetera.

But at the end of the day, they can market the size however they like. Hence, liters of soda and gallons of milk.