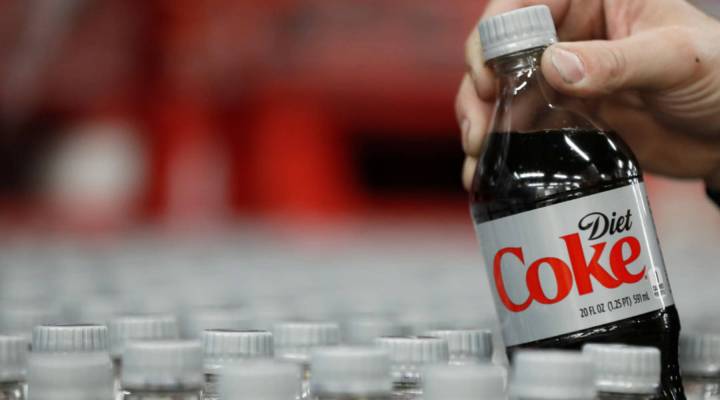 COPY
By the end of 1983, Diet Coke was the top diet drink in the country. George Frey/Getty Images

By the end of 1983, Diet Coke was the top diet drink in the country. George Frey/Getty Images
Listen Now

U.S. soda consumption is down amid anti-obesity campaigns and an overall trend toward health and wellness. But ironically, the soft drink Americans are ditching the fastest is diet soda.

Diet soda was invented in the 1950s by the vice president of a New York hospital who wanted a sugar-free option for diabetic patients. He sold the first diet soda as “No-Cal,” using artificial sweeteners called cyclamates.

“A hospital’s quite a narrow market, so fairly soon after, he started selling it in New York grocery stores,” said Tristan Donovan, author of  “Fizz: How Soda Shook Up the World.”

No kidding. When Coca-Cola launched Tab in 1963, the company sold it as a way to watch your waistline and impress dudes, with the tagline “Tab can help you stay in his mind.”

The next year, Diet Pepsi launched with a similar appeal: “The girls girl-watchers watch drink Diet Pepsi.Try it. Someone will be watching.”

By the mid-60s, about 15 percent of soda sales were diet. Then a study linked cyclamates to bladder cancer in rats, and the Food and Drug Administration banned the sweeteners. The market collapsed. Companies tried switching to saccharine, then aspartame, which was used in a new brand launched in 1982: Diet Coke.

When Diet Coke launched, the category had rebounded, and demand for diet soda was growing three times faster than for full-calorie soft drinks. By the end of 1983, Diet Coke was the top diet drink in the country.

Demand for diet drinks surged for decades, peaking in 2006. But since then, diet soda sales have dropped more than 30 percent.

“That’s because there’s been some negative evidence about diet sodas messing up your metabolism, and that’s been something people have noticed in the news,” said Tufts University food economist William Masters. Today’s consumers are looking for naturalness and simplicity. “Clean food,” he said. “Food that has only ingredients you can pronounce.”

Masters said “dieting” in general is out of fashion, seen as temporary deprivation rather than forming healthy eating habits for life.

“If I were naming diet soda today, I would not call it diet soda, and I think plenty of companies are doing that,” Masters said.

The latest iterations of low-calorie cola are now called “Coke Zero Sugar” and “Pepsi Zero Sugar,” although they both still use pretty much the same ingredients as the Diet Coke and Diet Pepsi next to them on the shelves. These marketing moves may simply be stopgaps for the soda industry.

“Over time, the very idea of low-calorie sweetness might fade as something that anyone is even looking for,” Masters said.

That’s why soda companies are doubling down on drinks like water, juice and tea, hoping to keep the business of those ditching diet drinks for good.