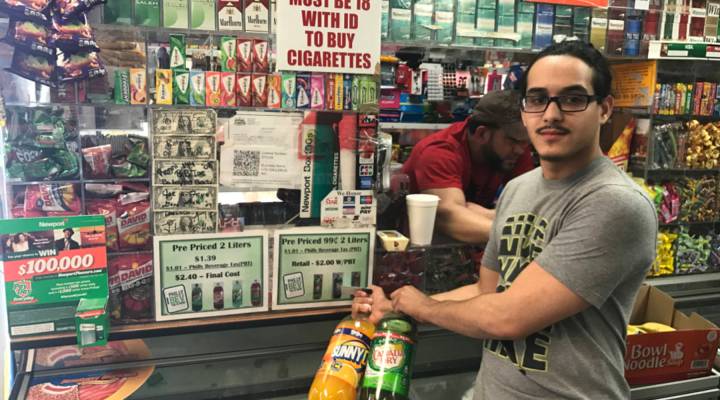 Michelle Murray was  browsing the soda aisle of her neighborhood corner store in North Philadelphia.

“Oh, my goodness. Oh, that’s ridiculous,” Murray said. “A dollar eighty. For a 16 ounce Pepsi? That’s just too much money for me.”

Murray opted for tea instead. Like her, other consumers are increasingly going for unsweetened drinks, according to Philadelphia retailers. Some report a 50 percent drop in soda sales.

“People are angry and furious,” said Frayby Perelta, who runs a small family-owned bodega. “There’s a lot of kids who come here with 75 cents and cannot even barely buy a chip. And now soda, they used to buy back then, or juice. It’s not just affecting us. It’s affecting everybody,” he said.

Both mom-and-pop stores and Big Soda say they are feeling the pinch of Philadelphia’s new tax on soft drinks. Pepsi recently announced 100 layoffs at distribution plants in the area and blames that on the tax. The soda giant said it was also forced to pull 2 liter bottles and 12 packs from the shelves.

In a statement, Philadelphia city officials said the soda industry is using the tax as an excuse for things that were going to happen anyway.

Philadelphia city officials passed the tax, in part, to pay for more free pre-kindergarten programs. The tax is expected to bring in $91 million over the next year. That’s been a boon to people like Damaris Alvarado-Rodriguez. She operates two pre-K centers.

“When [merchants are] upset and they say, ‘Well, you know, we’re gonna lose our job,’ and I’m like, ‘Well, I’m hiring.’” Alvarado-Rodriguez said. Her free preschool has added 30 kids since the tax took effect in January. She’s planning for an additional 80 seats.

“I really feel bad for the merchants and the small business owners, but I also look at the positive effects we’re doing for these children,” Alvarado-Rodriguez said.

But her expansion hinges one unpredictable factor: the outcome of lawsuit filed by the beverage industry challenging the legality of the tax, which is currently pending before a Pennsylvania appeals court.