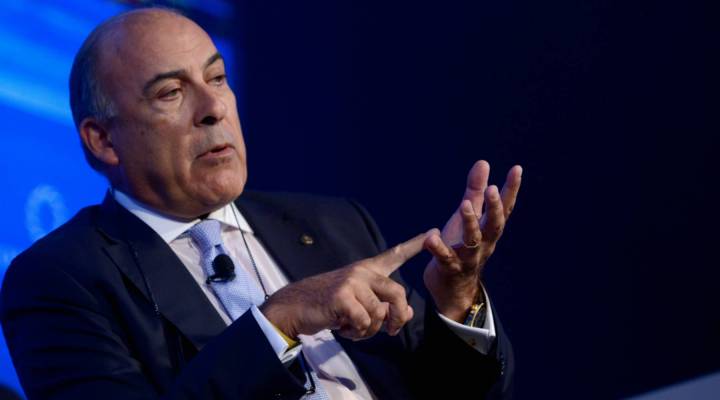 Chairman and CEO of the Coca-Cola Company Muhtar Kent speaks on stage during a summit in New York last year. Leigh Vogel/Getty Images for Concordia Summit

Chairman and CEO of the Coca-Cola Company Muhtar Kent speaks on stage during a summit in New York last year. Leigh Vogel/Getty Images for Concordia Summit

Coca-Cola announced today that CEO Muhtar Kent will resign next year, with COO James Quincey taking over the position.

The company’s sales have been on the decline for the past three years, as consumers gravitate toward less sugary options. Quincey was involved in the company’s decision to sell soda in 7.5 ounce “mini cans” and cut sugar content across the board, reported the Wall Street Journal. Rivals like Pepsi also moved to reduce the amount of sugar in their drinks.

Kent, who will remain chairman of the board for beverage company, talked to Marketplace Morning Report host David Brancaccio in 2013 about Coke’s role in global society and the country’s obesity problem.

“There’s nothing wrong with having a beverage that has calories, as well as having food with calories or sugar or dessert or ice cream in the world,” he said. “The most important thing in the world is we have to raise the awareness of energy balance. It is all about energy balance. Calories in and calories out.”

The notion of “energy balance” is a philosophy that Coca-Cola has promoted since. Coca-Cola even funded the Global Energy Balance Network, which concluded “people are not focused enough on physical activity.” The group shut down a year ago, after increasing public concern that the group’s mission was “to downplay the link between soft drinks and obesity,” The New York Times reported.

You can listen to the full interview with Kent below: