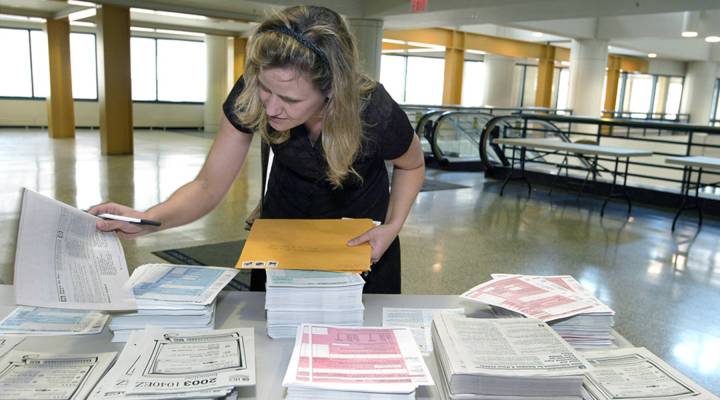 COPY
Alternative tax filers have to file their taxes twice, under form 1040 and form 6251. The higher tax is paid. Tim Boyle/Getty Images

Alternative tax filers have to file their taxes twice, under form 1040 and form 6251. The higher tax is paid. Tim Boyle/Getty Images
Listen Now

The Republican tax plan is just a rough framework, but even at this stage it calls for an end to the alternative minimum tax on the grounds that “it no longer serves its intended purpose.” So, what is the purpose of the AMT? And how did it come about in the first place?

To answer those questions, I went to a bar in Washington, D.C.’s Adams Morgan neighborhood called Madam’s Organ. I get there in the late afternoon – well before things get going. If I had come back at night, I would have had to pay a cover to see the band. Or a two drink minimum to embarrass myself at karaoke. Madam’s Organ has entertainment every night, and, says the bar’s owner, Bill Duggan, somebody’s got to pay for it.

“We gotta pay the band, the wait staff, insurance, which is astronomical,” he said.

And just hoping that people drink and eat enough to cover the costs won’t work. The government operates in a similar way. It also has to pay the band. Think of the AMT as the government’s two-drink minimum. The tax was designed to ensure that we all pick up our fair share of the tab.

“The intention of the minimum tax is to give the federal government a second bite at the apple if they didn’t catch you on your 1040,” said Martin Sullivan, chief economist at the nonprofit Tax Analysts.

To get that second bite, the government requires filers with lots of deductions to calculate their taxes twice — once under the regular rules of the 1040 and once under the AMT rules. Whichever tax is higher is the one they pay. The AMT, which these days is typically around a $7,000 add-on, got its start in 1969 in the final days of the Lyndon B. Johnson administration.

Joseph Barr, the outgoing Treasury secretary, “revealed to the U.S. public that there were hundreds of tax-free millionaires,” Sullivan said. “And this bomb shell got the public’s blood boiling. That got the attention of Congress and as a result the AMT was born.”

“It’s a very complicated form,” said retiree Alan Johnston, from Kensington, Maryland. Johnston and wife, Anne Cross, have paid the alternative minimum tax four times. “I have no problem with the AMT other than the fact that some rich people still can manage to avoid taxes,” Johnston said.

Yes, even the AMT has loopholes. And Sullivan said people with the most money are the most likely to slip through them. The AMT typically ensnares higher-income taxpayers, but not the 1 percent. It did snag President Donald Trump, who paid an additional $31 million under the AMT in 2005. He’d be happy to see it go.

“The AMT is actually a shadow tax system that forces people to calculate their taxes two different ways and pay the higher of the two amounts,” Trump said at a rally recently.

The Republicans say their tax plan would simplify the tax system and remove the deductions and loopholes that made the AMT necessary in the first place.

And Duggan, owner of Madam’s Organ? He said he understands the limits of minimums, that they’re complicated and hard to enforce. But, “There’s gotta be a payment,” Duggan said. “Without it, nothing works. And as long as we all pay some share — whatever our fair share is — it’s going to work.”

Duggan said people feel better when they pay up. Or maybe that’s the drinks.