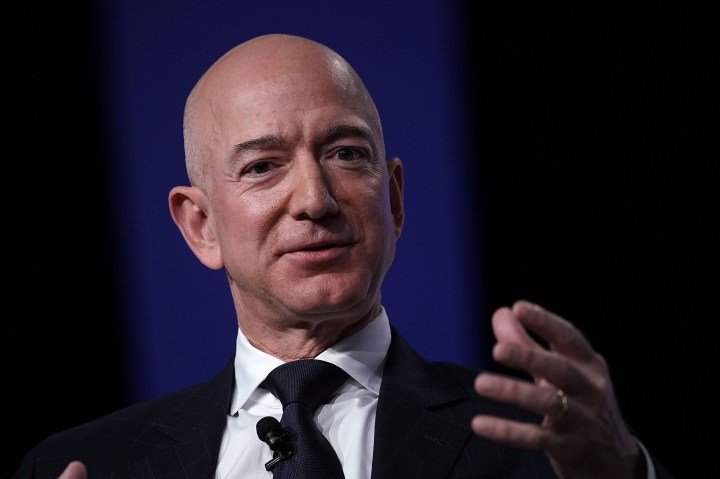 Amazon founder Jeff Bezos is worth an estimated $192 billion, according to Forbes. Alex Wong/Getty Images

What would be the effects of a national maximum wage? For instance, if the top-paid person at a company could not make more than 5 times the lowest paid person.

As employee pay remains stagnant in the U.S. and inequality worsens, lawmakers, activists and workers have been advocating for a higher minimum wage. The push gained momentum in recent years through movements like the Fight for $15, which backed this week’s McDonald’s strike.

Congress last raised the federal minimum wage 14 years ago, the longest period on record without an increase. Some Democrats tried unsuccessfully to include a hike in Congress’ latest COVID-19 relief package, although President Joe Biden was able to raise the minimum wage to $15 an hour for federal contractors through executive order.

But what if we looked at the inverse of this, as Dennett asks, and put a cap on how much corporate executives make?

The pandemic has exacerbated, and spotlighted, income inequality in this country. Billionaires grew even richer this past year. Their total wealth increased by $1.3 trillion during the first 11 months of the pandemic, according to Americans for Tax Fairness and the Institute for Policy Studies. Meanwhile, more than 82 million Americans have filed for unemployment benefits since March of last year.

Proponents of a maximum wage, or some form of it, include lawmakers and journalists. One of them is Sam Pizzigati, co-editor of Inequality.org and author of the book “The Case for a Maximum Wage.”

Pizzigati said our current compensation system incentivizes CEOs to “behave outrageously,” noting how executives profited off the painkiller OxyContin, which had a role in the country’s opioid crisis.

To be clear, when proponents talk about “maximum wage,” they’re not just talking about salaries. They think this policy should encourage caps on executives’ total compensation, which would include stock options. To achieve that, they say a corporate tax could be placed on businesses whose executives earn more than a certain amount — relative to their lower-paid workers.

Michael Reich, an economics professor at the University of California, Berkeley, said via email that the U.S. already has some form of a maximum wage. Starting in 1993, CEOs could not deduct more than $1 million on their taxes, unless that pay was performance-based.

But he pointed out that after this policy went into effect, stock options became a much bigger share of executive compensation. (The Tax Cuts and Jobs Act, passed in 2017, repealed this performance-based loophole.)

Sen. Bernie Sanders of Vermont, along with other Democratic leaders, recently unveiled the Tax Excessive CEO Pay Act, which would impose tax rate increases beginning at 0.5% on companies that have CEO-to-median-worker pay ratios above 50-to-1.

The effects of a maximum wage

“A maximum wage would send a message that there’s more to life than chasing after ever greater amounts of money,” Pizzigati said. “Less inequality, less concentrated wealth, less power among a small elite would be good for our democracy.”

To Pizzigati, the ideal ratio for CEO-to-worker compensation would be 10-to-1. “If we want a society where people can acknowledge each other’s humanity, we have to be close enough to them in income that we can really see them and understand the life that they’re leading,” he said.

However, Ioana Marinescu, an assistant professor at the University of Pennsylvania, said there could be potential downsides to a maximum wage policy. It could encourage firms to eliminate low-paid employees and instead hire contractors or freelancers to do the same work without formally being part of the company.

That would make the pay gap between executives and the company’s direct employees seem smaller, she explained, making it appear that everyone is well-paid.

And even with a higher tax rate, Marinescu said, if companies were disincentivized from paying top executives lavishly, there’s a question of what they will do with the money they save. Instead of redirecting it to lower-paid workers, Marinescu said it could be used to reward shareholders.

Although some lawmakers are pushing for federal restrictions on CEO pay, some cities have imposed levies of their own in recent years.

In late 2020, San Francisco decided to place a 0.1% surcharge on a company’s annual tax obligation if its top executive makes 100 times what median workers make. If the executive makes 200 times as much, the surcharge increases to 0.2%.

This overlaps with a similar law passed in Portland, Oregon, back in 2016. The city levies a 10% tax surcharge on companies that pay CEOs 100 to 250 times more than their median workers.

These surcharges in Portland and San Francisco apply to the taxes a company owes to each city, not its entire tax liability. However, while San Francisco is taxing both public and private businesses, Portland’s rule only applies to publicly traded companies.

Samuel Brunson, a tax law professor at Loyola University Chicago, told NBC News that the law does not bring in that much revenue, and it appears CEO pay wasn’t impacted.

Marinescu said that because this is done at the city level, a surcharge may not represent a significant part of a company’s business or tax liability.

“It’s symbolic, but it doesn’t necessarily do too much, I would think, for actually lowering pay,” she said.

Because of all the complications surrounding pay, Marinescu said she thinks the most efficient way to go about this is to raise marginal taxes on top incomes.

Pizzigati thinks individual tax rates can be considered a form of maximum wage, too. He said that in 1942, President Franklin Roosevelt called for a 100% tax on incomes above $25,000, which would equal about $400,000 now, adjusting for inflation.

Pizzigati said Roosevelt wasn’t able to achieve that, but he noted that the marginal tax rate reached 94% during World War II and remained around 90% for the next 20 years.

When it comes to reducing inequality, the debate often leads back to using taxes to achieve this goal. There’s a reason “Tax the rich” has become a familiar rallying cry.