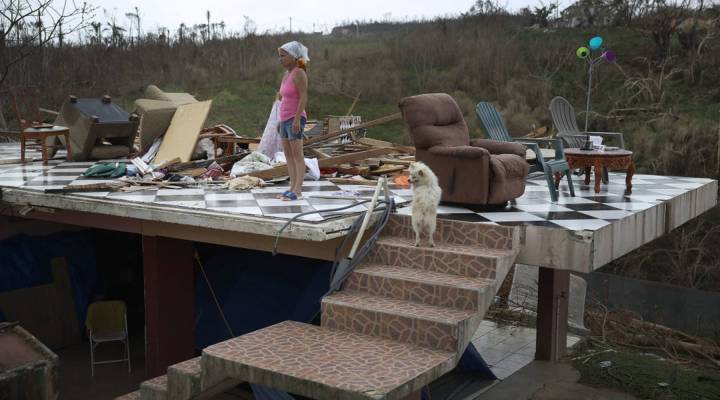 COPY
Irma Maldanado stands with Sussury her parrot and her dog in what is left of her home that was destroyed when Hurricane Maria passed through on September 27, 2017 in Corozal, Puerto Rico.  Joe Raedle/Getty Images
Weather Economy

Irma Maldanado stands with Sussury her parrot and her dog in what is left of her home that was destroyed when Hurricane Maria passed through on September 27, 2017 in Corozal, Puerto Rico.  Joe Raedle/Getty Images
Listen Now

“Everyone lost everything,” said Tara Rodriguez Besosa. She owns a restaurant called El Departamento de la Comida in San Juan, Puerto Rico, and she’s talking about the farmers she works with on the island.

In the aftermath of Hurricane Maria, the New York Times reported that 80 percent of the crop value on the island — about $780 million — had been lost to the storm. Puerto Rico imports about 85 percent of its food, but the crop loss will be felt significantly in the farming community and beyond, in part because many of the other islands that Puerto Rico sources food from were hit hard by the storm and the lack of power on the island has slowed down shipping.

For farmers and the smaller communities that depend on their farms, the loss is even greater. These communities rely much less on imported food and eat mostly what’s grown in Puerto Rico. For some, the loss of crops will mean no food.

Frances Robles, a reporter for the New York Times who is on the ground in Puerto Rico, said that the change to the landscape is drastic.

“The area in the southeast where a lot of farms are was pretty staggering,” Robles said, “you could go to a plantain farm, and for as far as the eye could see, there were downed trees … the other thing visually that was really striking is that the regular foliage has been completely stripped, not just of the leaves, but also of the bark. It looked like there had been a post-apocalyptic drought.”

Recovery will not be easy or fast. Farms have been stripped down to the soil by wind, and farmers will need to grow back what they lost from seeds.

Tara Rodriguez Besosa hopes that part of the regrowth of crops on the island will include sustainable farming measures and planting — fewer exports, like mangoes and coffee, more food that can be consumed on the island, so Puerto Rico can scale back on imports.

To hear Marketplace Weekend’s full interviews with Frances Robles and Tara Rodriguez Besosa, tune in using the player above.