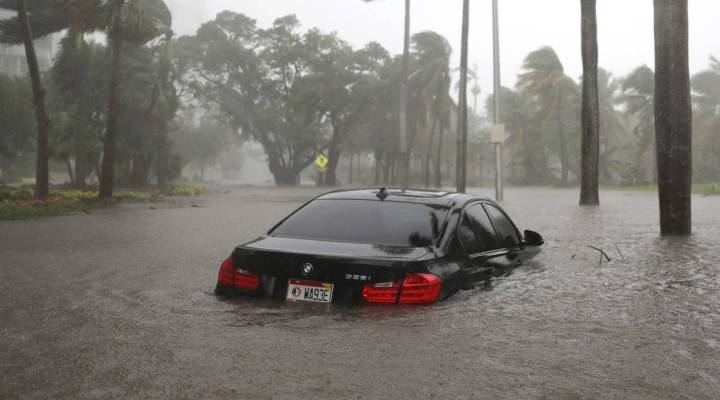 COPY
A car is seen in a flooded street as Hurricane Irma passes through on September 10, 2017 in Miami, Florida. Joe Raedle/Getty Images
Weather Economy

A car is seen in a flooded street as Hurricane Irma passes through on September 10, 2017 in Miami, Florida. Joe Raedle/Getty Images
Listen Now

Hurricane Irma left thousands of families in Miami-Dade without power for days and without the ability to get to work. For Miami’s most vulnerable low-income communities, it’s a situation that compounds the poverty that existed long before Irma made landfall.

Mary McKenzie lives in Miami’s Little Haiti neighborhood with her husband and six kids. “I pay $1,600 a month rent. Sometimes my husband’s check for the whole two weeks or three weeks— we have to struggle it out to pay that,” she said.

Before a hurricane, people are told to stock up on supplies — enough to last at least three days. Many families in South Florida could not afford to do that before Irma made landfall. About 530,000 people live below the poverty line in Miami-Dade County.

“We just making ends meet. That’s why when this storm came we didn’t have money to be doing all this. But now we have to dip into money we have for other bills to feed kids every day. That’s how we’ve been feeding our kids,” McKenzie said.

After the hurricane some nonprofits and neighborhood groups made an effort to get food to families in need, but that took time and didn’t reach everyone. Four days after the storm, Lorenze Burse, age 12, was standing in line with his grandmother for free ice in Liberty City. At home, his options for breakfast were “pop tarts, brownies and chips… oh and cookies,” he said.

His grandmother, Thomassina Smith, said after days with no electricity that’s all they had left. “Today will be the first day without food,” she said at the time.

The extended power outage and spotty internet service also meant many of the neighborhood stores that did reopen could only accept cash, so people who receive government food assistance could not use their electronic benefit cards to pay for groceries

James Valsaint is a community activist with the Miami Dream Defenders, a social justice group that sent volunteers to low-income neighborhoods after the storm.

“We knew what communities would be hit the hardest yet nobody did anything to prepare for it in any real concrete ways; basically the poorest communities that were already vulnerable,” he said.

At a recent Miami-Dade commission meeting, Miami-Dade Mayor Carlos Gimenez defended the county’s efforts, saying it provided food to many communities in need.