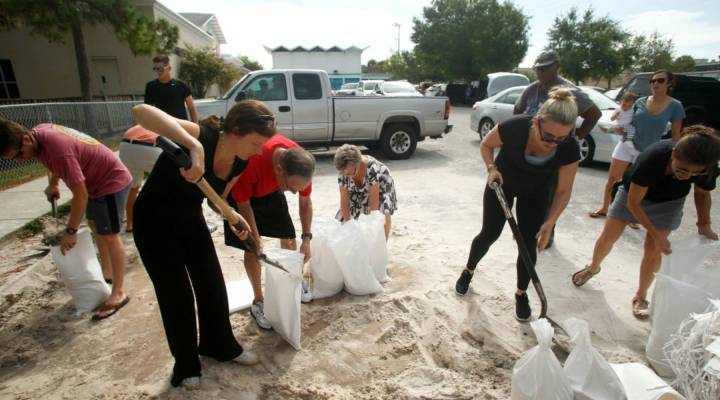 COPY
Residents work together to fill sandbags for each other at Bobby Hicks Park as residents prepare for Hurricane Irma on Tuesday in Tampa, Florida.  Brian Blanco/Getty Images
Weather Economy

Residents work together to fill sandbags for each other at Bobby Hicks Park as residents prepare for Hurricane Irma on Tuesday in Tampa, Florida.  Brian Blanco/Getty Images
Listen Now

All eyes in Florida today are on Hurricane Irma, which, if it makes landfall on the U.S. mainland, could hit the state this weekend. Those watching Irma’s progress include the Tampa Bay area which hasn’t seen a hurricane like this in almost 100 years. Back then, the area wasn’t as populated or developed but now there are 4 million people living there and plenty of new buildings and homes, some of which haven’t been built well to withstand a major storm. Darryl Fears is a writer for the Washington Post, where he wrote an article about “Tampa Bay’s Coming Storm.” Marketplace host Kai Ryssdal called him up to talk more about what the Tampa Bay area could be facing if a hurricane hits. The following is an edited transcript of their conversation.

Kai Ryssdal: That is a stunning figure, that the World Bank says Tampa Bay, in the United States, is one of the top 10 most at risk cities for hurricane damage.

Darryl Fears: It was a surprising find during the reporting, all of that. Everything I found about the risk that Tampa Bay faces was a bit surprising because I’m from Tampa Bay.

Ryssdal: Well then you know the next series of questions I’m going to ask you, which is they’re at risk and yet they keep on building on the waterline, on the waterfront with basically no mitigation?

Fears: Very little mitigation. They just started to do that. A lot of the wetlands are gone. They dredged up muck from the bottom of the bay and created islands and extended land and built on that. There are high rises even in sleepy downtown St. Petersburg now and Tampa is just, it’s a little Miami. That creates a huge amount of risk.

Ryssdal: What are the forecasts for if and when a big storm hits Tampa? And we’re not even talking about Irma here, it could be anything.

Fears: It could be anything but the big problem with this hurricane and with Tampa, St. Petersburg, Tampa Bay, is sea level rise. And sea level rise is not a big deal in and of itself because it takes so long to build. But when you add wind, you add surge, that creates a wave, just a wall of water. Tampa Bay is a very shallow bay, it’s no deeper than 20 feet in the middle of the thing. And so when you get a big blow of wind, it just pushes the water on land.

Ryssdal: The other thing you point out in this piece is that, I guess partly because it’s such a shallow bay, the floodwaters are sticking around longer.

Fears: The floodwaters just stay. Not only because they haven’t paid enough attention to resilience until recently, the drainage isn’t all that great. The water stays in the pipes longer and barnacles and a bunch of gunk gets in there and the water can’t drain properly and so it just sticks around in the streets, or it will stay in your home. And if there’s a bunch of flooding as a result of this storm, it’s just going to stay there.

Ryssdal: Has to be said though, that for all the building that’s happening, and all the the real estate deals that are happening in that area, there are some people trying to make folks pay attention.

Fears: Oh there are. And they are creating some awareness there and I think that they’re going to get on the ball with this. But it takes a lot to ramp up resilience to climate change. It takes a great deal of work, and they’re just not there yet.

Ryssdal: For all the work that is being done you point out and in fact you end the piece with this little tidbit, the real estate market in Tampa-St. Pete: booming.

Fears: It is hot, especially near the water and what people do in these areas near the coast, in most areas they require you if you build a new property to at least build three feet higher than the property that was there. And in this case you have rich people just buying middle-class people’s homes, destroying them, and sticking a McMansion on the lot.