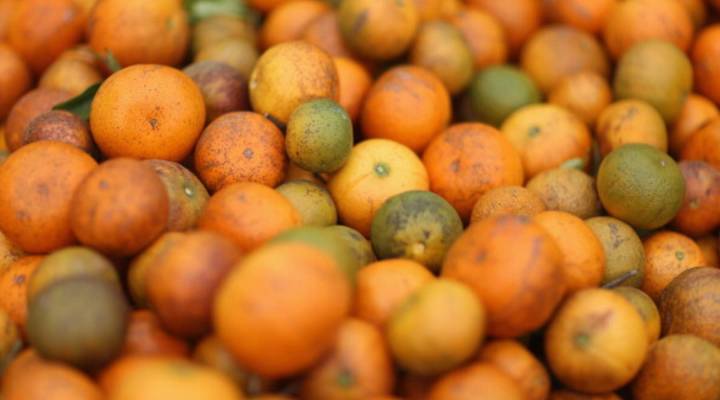 COPY
Hurricanes are added stress on citrus farmers in Florida who already battle greening, a disease that effects their trees and causes bitter fruits to fall off of them prematurely. Joe Raedle/Getty Images

Hurricanes are added stress on citrus farmers in Florida who already battle greening, a disease that effects their trees and causes bitter fruits to fall off of them prematurely. Joe Raedle/Getty Images
Listen Now

Last year was the costliest hurricane season on record in the U.S., and Hurricane Irma was the fifth costliest storm of its kind in history. Storms like Irma have costs that can keep hurting people for a long time. For instance, the damage it did to citrus trees in Florida. Marketplace host Kai Ryssdal checked in with Mark Wheeler, a citrus grower in central Florida, whose trees were damaged by Hurricane Irma, to see how business is one year after that storm. The following is an edited transcript of their conversation.

Kai Ryssdal: So it’s been a while since we talked to you. But I wanted to touch base today about what happens after a hurricane. It’s been about a year since Irma came through and really whacked Florida citrus, right?

Mark Wheeler: Yeah, that is correct. I think it was Sept. 11 last year, or maybe the 10th maybe, actually, when the storm first started hitting us. I don’t know if you can condense that into a couple sentences. But really I guess, initially, you just kind of assess where the worst damage is and kind of prioritize what needs to be attacked or addressed initially.

Ryssdal: Would you say after a year you’re back where you want to be?

Wheeler: We’re getting there. I don’t know if I can say we’re back where we’d like to be, there’s things obviously, you just contend with. You recognize right quick where the shortfalls may be in your insurance policies. And so you always come up with a little bit more out of pocket than you’d like to. But you’re just thankful for that. So we’re getting there, we’re in pretty good shape compared to what we went through and where we would have been this time a year ago. Certainly we’re getting there.

Ryssdal: As I said, it’s been a number of years since we spoke to you. The last time we chatted was about this thing that Florida’s citrus has been dealing with for a while now , this thing called greening. First of all, remind is what that is.

Wheeler: It’s kind of like a vascular disease for the citrus trees and it just really kind of thwarts their growth patterns. And it takes some time — a year two to kill the tree, but it doesn’t allow the fruit, as the infection gets worse, to properly mature on the tree. So we’re working through that the best we can.

Ryssdal: Well, so you got the hurricane, you’ve got the greening, you’ve got production way down.

Ryssdal: Do you have people down there and have you ever thought of, just … I’m going to sell half my orchards and you know, sell it to an apartment developer?

Wheeler: You see that happen, and we’ve actually done that ourselves in several cases, but in a lot of those instances, you see folks who collect that revenue from our sales proceeds and go find more acreage to buy somewhere else. And reinvest that and replant. Now, in some cases, if you see somebody who might be an accountant in Milwaukee or a dentist in St. Louis whose grandfather planted a grove in central Florida back in 1920 and now it’s only 15 minutes from Disney World, you do see cases like that where folks completely liquidate altogether. But, you know, folks who are still here and still active, in some cases they may throw their hands up and walk away from it, but I would say the larger majority are ones who are staying in it to some degree. They may be just relocating to a more rural area.

Ryssdal: Does it kill you to sell off a couple of hundred acres that you’ve, you know, pruned the trees on and stuff?

Wheeler: It does. At the end of the day, you got to just understand it’s a business decision, but it’s tough especially if it’s one you’ve had for 15 or 20 years. My brother and I often joke about that because there’s a couple pieces we’ve had in our family for 30 to 40 years, and knock on wood, we haven’t sold those off yet. But I’m sure someday that opportunity may come and it’ll be tough to sell those — it will be — because you’re not just talking about something that’s a day-to-day business venture of ours, but something we remember growing up. So that makes it tough.