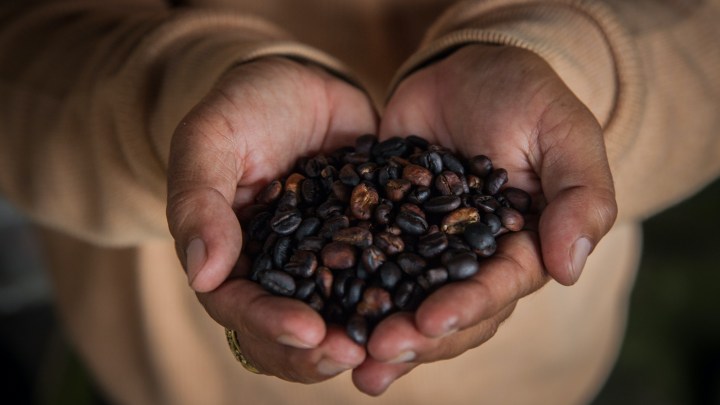 I’m in a car winding through the mountains of Adjuntas, a region on the central west side of Puerto Rico. Tropical plants form a lush, green tunnel on either side of me.

But I’m focused on what’s in front of me: a one-lane road on the edge of a cliff with no guard rail. At every blind turn, we honk the horn to warn cars that we’re coming.

Thirty minutes of white-knuckled driving later and we finally reach Sandra Farms, where I meet Israel Gonzalez. He and his wife, Sandra, bought the farm about 25 years ago. Gonzalez, 80, is a third-generation coffee farmer. But keeping the family tradition alive has been hard.

“We’ve gone through about three or four hurricanes. That’s all,” laughs Gonzalez, who often makes jokes when he’s talking about something tough.

There was Hurricane Georges in 1998, which destroyed thousands of coffee plants and their house.

“And then, of course, in 2017, Irma, Maria and even Isaias last year caused some damage up here,” he said.

Maria destroyed almost all of Gonzalez’s coffee crop, and along with Irma, 80% of the island’s. The recovery has been slow. It takes three to five years to regrow coffee plants before they start producing beans, which means Gonzalez is just turning a small profit for the first time in years.

But for all the destruction Maria left behind, it also left a way for Gonzalez to rebuild the business.

“I think what happened was 200-mile-an-hour winds here chopped off the canopy in the forest. So that allowed the trees to get a little sun,” said Gonzalez. “So we found them. Ah! We found a gold mine!”

That gold mine is Typica coffee. “The coffee of popes and kings they used to call it in the 1800s,” he said.

Typica is a specialty bean in the Arabica family. Maybe you’ve heard of Kona from Hawaii or Jamaica Blue Mountain. Soon there will be Forgotten Forest — that’s the working title — grown at Sandra Farms.

This coffee will sell for $60 a pound — expensive because specialty coffee is also expensive to farm. Typica trees are more susceptible to disease, they don’t produce a lot of fruit, and that fruit has to be picked by hand. Plus, it’s hard to convince people to drive into the mountains to do the work.

So Gonzalez had to come up with a creative way to get some capital. His plan: crowdsourcing from coffee snobs.

“If you invest $13 per tree, we will grow that seedling to the third year, when it begins to produce coffee. All of the coffee that we produce from those trees belongs to those who participate in the project,” he explained. “Now, from the fourth year on, we gotcha, though. You’ve got to buy it from us.”

Forgotten Forest isn’t ready to taste yet. But Gonzales served the Bourbon coffee he’s harvesting now. He prefers the pour-over method, which is done by hand.

“Use good water. The temperature should be between 196 and 207 — not boiling,” he said, adding that there should be a 1-to-15 ratio of coffee to water. And don’t even think about reaching for milk and sugar.

Gonzalez slowly pours hot water over the grounds, and they instantly puff up.

“This coffee does that because the beans are fresh,” he said. “They call it a mushroom or a bloom because the gasses must escape.”

The coffee is strong, but with a chocolatey sweetness. Typica is more delicate and smooth, Gonzalez said. Forgotten Forest should be ready for harvest in a couple years, “barring any hurricanes,” he said. “If you fear the hurricanes, then you don’t do anything, so you move on.”

And if a hurricane does come, you just hope it leaves you with some magic beans.