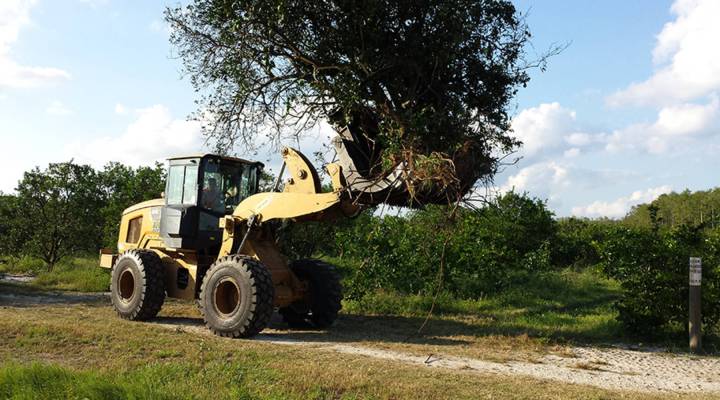 COPY
Thousands of trees were uprooted by Hurricane Irma in Everglades Harvesting's 500-acre orange grove near Naples. The trees are being dumped on burn piles to make room for costly replanting. This year's crop is mostly a loss, says Paul Meador, a fourth-generation citrus grower. Mitchell Hartman/Marketplace

Thousands of trees were uprooted by Hurricane Irma in Everglades Harvesting's 500-acre orange grove near Naples. The trees are being dumped on burn piles to make room for costly replanting. This year's crop is mostly a loss, says Paul Meador, a fourth-generation citrus grower. Mitchell Hartman/Marketplace
Listen Now

When Hurricane Irma made landfall in Southwest Florida on Sept. 10, the state’s citrus groves were hit especially hard. And they were already vulnerable, after more than a decade of struggle against a devastating crop disease. Hurricane Irma’s severe winds, rain and flooding left extensive damage in the groves, which growers say will take years to recover.

Paul Meador, a fourth-generation citrus grower, has spent the last two and a half months assessing damage and supervising cleanup of his family’s groves and logistics facilities across Southwest Florida. The company, Everglades Harvesting & Hauling, supplies juice oranges to Florida’s Natural coop.  His operation has 50 full-time employees and typically hires about 500 seasonal workers on temporary work visas to pick and process fruit. It is based in LaBelle, Florida, in Hendry County, northeast of Marco Island, where Hurricane Irma came ashore after first crossing the Florida Keys.

“This is where the eye wall of the storm passed over,” said Meador, pointing to a row of toppled orange trees, with fallen fruit and leaves still scattered on the ground. “We’ve cleaned up a lot already, but there’s a lot of broken limbs laying around. We have two front-end loaders that have been working here for over a month.”

He pointed to one front loader, carrying a huge uprooted orange tree to dump on a burn pile.

“That’s one of thousands that we’ll be removing in this block,” he said.

“A lot of our best-producing trees have been destroyed, so we have to replant the trees that are gone, and those were the workhorses that really generated money for us. I would guess that two-thirds of our crop is gone — either because of tree loss or the fruit was shaken out of the trees. So now we have to fund another entire crop year. It’s going to be a very challenging 24 months to come.”

“You cannot replant a tree,” said Reyes Chavez, who has spent time working in the orange groves that surround the town of Immokalee. The harvest season usually starts mid-October. “That’s a season that’s completely destroyed for all the orange groves. Thousands of workers without a job — it’s hard.”

Toppled orange trees lie next to a canal in Everglades Harvesting’s 500-acre grove in Southwest Florida. The property was in the direct path of Hurricane Irma.

Andrew Meadows, a spokesman for Florida Citrus Mutual, a trade organization for growers, points out that even before the hurricane there were problems.

“We were facing the fight of our lives before Irma,” he said. “A dozen years ago we were producing 242 million boxes of oranges. Last year we produced about 69 million boxes. Some of that is due to development, some is due to previous hurricanes. But a large portion of it is due to HLB.”

HLB is the abbreviation for a plant disease called Huanglongbing, or citrus greening. It’s caused by a bacteria spread by a tiny invasive insect that saps the orange trees of nutrients, ruining the fruit and weakening the trees. There’s no cure for citrus greening, but agricultural scientists have made significant progress to mitigate its damage for growers like Meador, whose trees were developing a healthy crop this year.

“We were hoping that this was going to be a rebound year,” Meadows said. “Unfortunately, Irma came through, and we took one step forward and maybe five steps back.”

Meadows predicts growers statewide will end up losing more than half of this year’s crop to Hurricane Irma. The Florida Commissioner of Agriculture has estimated the cost of Irma to Florida’s farm sector at $2.5 billion, with projected losses to citrus producers the worst of any sector, at $760 million.

“When a tree sits in water for two, three, four days, it destroys the root system and kills the tree,” Meadows said. “We won’t know the true effects of Irma until a year or two from now. So that $760 million is expected to grow. And if we don’t receive a relief-rebuild package, there’s going to be a mass exodus from the industry.”

The Florida congressional delegation, along with Florida’s governor and other state officials, have been lobbying hard in Washington, D.C., for federal disaster funding dedicated specifically to helping the citrus industry.

So far, dedicated funding for Florida citrus has not been included in the two disaster-aid bills passed by Congress totaling more than $50 billion. And it’s not in the White House’s most recent $44 billion supplemental request submitted in mid-November, either. U.S. Rep. Dennis Ross, a Republican from Florida, strongly criticized the latest funding proposal, saying in a statement: “I cannot — I will not — support a proposal that leaves behind over 60,000 Florida jobs.”

Moody said that getting citrus assistance included in Congress’s next disaster bill is crucial.

“What’s available to them if we don’t get into the supplemental?” he asked, referring to Florida citrus producers. “The answer is: Not a lot.”

Florida usually produces about 60 percent of the U.S. juice-orange supply. Moody said that with domestic production slashed after Irma, orange imports to the U.S. from Central and South America are on track to nearly double.

“That’s the only option to keep the processing plants open,” he said.

And the supply crunch has caused prices to spike, with orange juice futures up about 25 percent since Hurricane Irma hit.