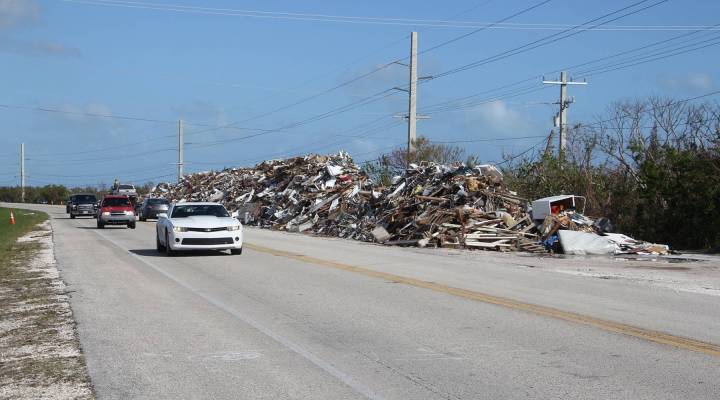 COPY
Most visitors reach Key West by driving down U.S. 1 — since Hurricane Irma, that has meant the once-scenic highway is now lined with debris piles like this one on Ramrod Key. Nancy Klingener/ for Marketplace
Weather Economy

Most visitors reach Key West by driving down U.S. 1 — since Hurricane Irma, that has meant the once-scenic highway is now lined with debris piles like this one on Ramrod Key. Nancy Klingener/ for Marketplace
Listen Now

A tourism destination relies on its image as a place where people want to spend their free time and their money. That can be a tough sell after the world has been inundated with pictures of disaster.

In the Florida Keys, the tourism industry is trying to rev up — especially in time to catch Fantasy Fest in late October, the biggest event of the year in the island chain. But many who live and work in the Keys are still digging out from Hurricane Irma.

A couple weeks after Irma crossed the Florida Keys as a Category four hurricane, Florida Gov. Rick Scott was back in town – his fifth post-storm visit to the island chain.

Standing behind him were the public officials you’d expect – the mayor, the police chief, the sheriff. But also a lot of people holding conch shells. The conch is the symbol of the Florida Keys and the locals greeted Scott with a chorus.

“Where we are today is we are absolutely open for business,” Scott said. “Our job is to make sure everybody comes back in droves. Our jobs are tied to it. Our livelihood is tied to it. It’s the most important thing we can do for all of our families.”

About 75,000 people live in the Keys – but five million people visit here every year. That’s big business. The county estimates tourism provides almost $3 billion annually to the local economy. And more than half of that tourism business takes place in Key West, the island at the end of the overseas highway.

“The hotels are ready. The restaurants are ready to serve up the food, the drinks, the bars. The attractions are ready to go,” said Virginia Panico, executive vice president of the Key West Chamber of Commerce. “And we welcome everybody, encourage everybody to come on down and support your Key West folks.”

The Florida Keys & Key West tourism agency is spending $1 million on advertising to bring back tourists. “Hurricane Irma may have knocked out our power but here in the Florida Keys, we’ve never been more connected … Together we’ve picked up the pieces. And we’re getting back to business,” reads the ad copy, running under images of subtropical beaches and historic homes.

The campaign uses the slogan “We are 1,” with the familiar U.S. 1 sign for the road that runs from Key West all the way up to Maine. But that same road – which most visitors take to reach Key West – also runs right through the areas that got the most severe damage from Irma. “We’ve had buses going through, taking pictures,” said Jim Ensminger, a retired firefighter who lives on Big Pine Key, about 30 miles from Key West.

His house fared relatively well in the storm, but his neighborhood saw some of the worst damage. Ensminger said he was impressed with Key West’s quick recovery, but said the resources that got the city back open should be devoted to helping those up the road. “People should come first. The residents should come first,” he said. “Then, the tourists.”

Key West’s mayor, Craig Cates, said the city is helping – directly and by making sure the jobs a lot of Lower Keys residents rely on are still there. “Because we’re in a hurry to get Key West open and back up in business doesn’t mean that we’re not concerned or care for our neighbors and what they’re going through,” he said. “But this is all part of the recovery process and we need to all work together for this.”

After the immediate challenges of cleaning up storm debris and bringing back visitors, Keys business owners are facing a more difficult task: Finding permanent housing for the people who clean the hotels and serve the drinks. That’s because many of them lost their homes.