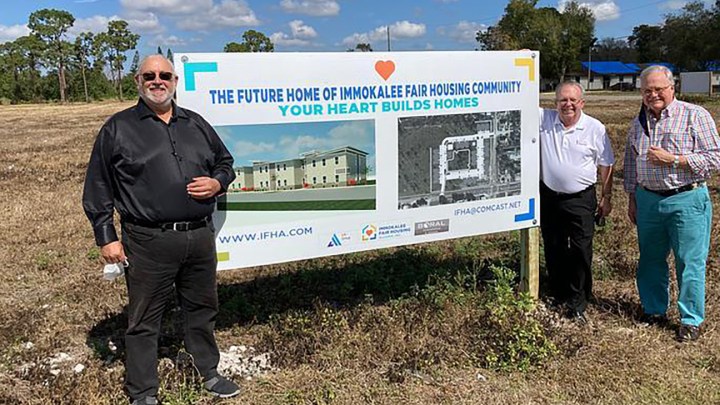 Hurricane Irma made landfall on the southwestern coast of Florida in September 2017, damaging million-dollar homes in beachfront communities from Marco Island to Naples.

About 40 miles inland, near Immokalee in Southern Florida’s agriculture belt, the storm devastated tomato fields and citrus orchards, leaving many temporarily without work and income.

The hurricane also devastated the stock of aging and weathered manufactured homes in Immokalee — locals call them “trailers” — where many of the Latin American immigrant workers who pick and process the fruits and vegetables live.

Immediate disaster relief rushed in after Hurricane Irma to help farmworker families with food, clothing, school supplies and hotel vouchers, all so they could live safely as work in the fields picked up again. Eventually, many moved back into the same sort of overcrowded, high-rent trailers that the storm had damaged or destroyed.

A few weeks after Hurricane Irma blew through Immokalee in 2017, this reporter took a tour of the damage to local housing with Julia Perkins of the farmworker advocacy group Coalition of Immokalee Workers.

“We are heading towards an area called ‘La Rata.’ It’s called ‘The Rat,'” said Perkins. “It’s almost all rental housing, trailer parks in disrepair. Here’s one of the trailers that got blown off its foundations.”

Five years later — aside from some clean-up and repairs — not much has changed.

Leonel Perez is a 36-year-old Guatemalan immigrant who started working in the fields when he was 20. After following the tomato crop from Florida to New Jersey for many years, he settled year-round in Immokalee and now works as an organizer for the Coalition of Immokalee Workers. Showing a visitor around downtown, he said: “Everyone wants to live in this area to find work. And it’s all trailers. In that one, there’s like 10 people living there.”

Perez said each renter is likely paying upwards of $80 per week, plus utilities. He said it’s hard to save enough to move to better housing when you’re picking tomatoes. “You’re going to work without getting a salary that’s fixed,” Perez said. “It’s always variable. That’s fieldwork. Sometimes you earn very little.”

And there aren’t many affordable housing options near shops and transportation to the fields, he said.

“There are like one or two families that are the landlords of many trailers. You have to live with the conditions like they are.”

The Immokalee Fair Housing Alliance is trying to change those conditions and increase the options for farmworker families.

“The lack of safe, affordable housing was the most critical factor in preventing low-income families from escaping from poverty and exploitation,” said Arol Buntzman, a retired real estate executive who chairs the alliance.

“They had no choice but to rent shacks and trailers that were 50 and 60 years old,” he said, “with mold and mildew and cockroach dust, holes in the floors and ceilings, still having it cost 65% or 70% of household income. There’s not enough money left over for decent food, medicine, clothing.”

Buntzman gathered together local church leaders and community organizers and founded the alliance, which broke ground on a new community apartment complex in November 2021 on vacant land near downtown Immokalee. The long-term plan is to build eight apartment buildings, plus recreation and community facilities providing childcare, job training and other services. There’ll be two- and three-bedroom apartments for low-income households, renting for between $650 and $900 per month.

That’s less than half what it costs to rent a trailer in town, said Buntzman. “If we can help 128 families with safe affordable housing that doesn’t consume more than 30% of their household income, it’ll stabilize the community, and then they’ll have money left over to spend in the shops.”

The alliance prepared the land for construction, obtained permits and has now finished basic infrastructure installation and engineering, with climate change front and center.

“The hurricanes are going to get more frequent and they’re going to get stronger,” Buntzman said. “So it’s concrete block, steel-reinforced, sprinklered, energy-efficient, built beyond code, designed for 180-mile-an-hour wind — same as for a disaster center.”

“We’d really like to be able to live there,” said Bernabela Gonzalez, a 48-year-old Immokalee resident. “It’s a great opportunity for our family.”

Gonzalez picks tomatoes; her husband does yard work. They have three school-age children. After Hurricane Irma, Gonzalez’s sister-in-law moved in with three more children because the storm had brought down a tree that destroyed their trailer.

“Our kids need space to study,” Gonzalez said. “There isn’t any the way we’re living now. And it would be good to be charged an appropriate rent, based on how much we earn.”

Construction on the first two apartment buildings is slated to start in July 2022. The alliance has raised more than $5 million so far from churches, nonprofits, local business owners and individual donors. Buntzman said completing the project will cost a further $15 million or $20 million.