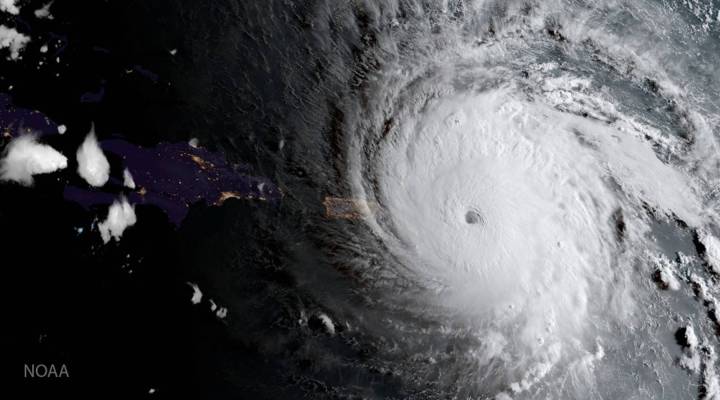 Hurricane Irma is a Category 5 storm that made landfall in the Caribbean this week and may hit Florida this weekend.

Part of preparing for a storm is having accurate predictions of what it will do, and good measurements are an essential part of that. The agency in charge of those predictions is the National Weather Service. It uses images collected from National Oceanic and Atmospheric Administration satellites to get a sense of how strong a storm is and where it’s going.

One of the instruments the agency is using is the new GOES-16 satellite — that stands for Geostationary Operational Environmental Satellite. The GOES-16 went into orbit last November and is technically pre-operational — NOAA likes for satellites to be in place for a year before they are officially operational. But meteorologists are observing the images it’s sending.

“One of the keys with GOES-16 data is it’s very high resolution data compared to what we’ve had in the past,” said Andrew Orrison, a meteorologist with the National Weather Service. “You can see a lot more detail with the imagery itself, so you can get a better capture of the exact intensity when it comes to severe weather.”

There are cuts to the National Weather Service and NOAA overall in the Trump administration’s proposed budget. Orrison couldn’t comment on what a budget cut would mean specifically for satellite operations, but he said if the National Weather Service saw any sort of degraded satellite imagery, regardless of the cause, it would certainly have an impact on weather forecasts.

“Remote sensing is critical to meteorologists, and that’s what the GOES satellites do for us,” Orrison said. “If you had any satellite that was degraded because it was not replaced in space or if it were to fail, that would have a rather significant impact on short-term operations for forecasting and the model output as well.”

Congress is expected to take up the budget this fall.