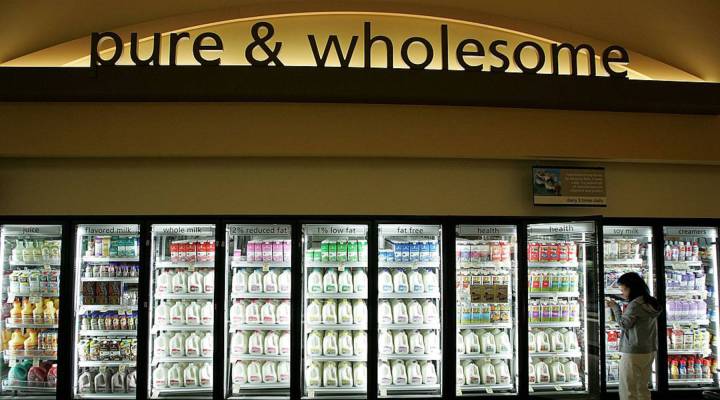 COPY
In 2016, organic food sales broke past the $40 billion mark for the first time. Above, a customer shops for milk at a Safeway's "Lifestyle" store in Livermore, California. Justin Sullivan/Getty Images

In 2016, organic food sales broke past the $40 billion mark for the first time. Above, a customer shops for milk at a Safeway's "Lifestyle" store in Livermore, California. Justin Sullivan/Getty Images
Listen Now

A couple of years ago, Steve Reuter decided to go organic at his dairy in Minnesota. He was aware of the trends — some organic dairies were fetching twice as much for their milk as conventional producers. And organic food sales were booming. In 2016, they broke past the $40 billion mark for the first time.

Reuter, a third-generation farmer, was already doing some of the things required of organic dairies, like letting his cows chomp grass out in his green pasture, instead of just giving them corn or soybean feed. Organic farmers have to accommodate animals’ natural behaviors. For cows, that means grazing.

“Couple other guys said, ‘You’re 80 percent there now, so why not finish it and get that extra money?’” Reuter said.

Steve Reuter’s dairy in Stillwater, Minnesota, which is going organic, is the kind of small, family-run farm many consumers may imagine they’re getting with organics. But critics charge too many big players are getting involved and harming the integrity of the organic label.

Consumers pay a higher price for organic food because it costs more to produce. Among other things, farmers have to buy organic seeds and forego synthetic pesticides, which means they may have to spend more time attacking weeds directly. That translates to higher labor costs.

Reuter is two years into a required three-year transition to organics. Next fall he’ll sell his milk through the farmer cooperative Organic Valley. To go organic, Reuter had to hire a company to certify him. It’s one of 80 accredited by the U.S. Department of Agriculture. He has to provide elaborate documentation on the kinds of seeds he’s buying and what he’s putting on his fields.

His operation is the kind of small, family-run farm consumers might picture when they think “organic.” He runs his dairy with his uncle and gets help from his brothers, wife and son. Together, they milk 45 cows.

Cows head out to graze in a pasture at Steve Reuter’s farm in Stillwater, Minnesota. He’s two years into a three-year transition to organic dairying.

But as organics grows as an industry, critics worry about maintaining its integrity.

Mark Kastel is co-founder of the Cornucopia Institute, an organic industry watchdog organization. He estimated about half of the organic milk sold in the U.S. now comes from dairies with 1,000 or more cows.

“We have livestock factories with as many as 15,000 cows on an ‘organic operation,’” he said.

And it’s not just milk; organic egg operations might house a million hens, Kastel said. He’s concerned that some big farms are pushing the limits of organic standards.  For example, some big poultry operations assert that a screened-in porch checks the box of the outdoor access they’re required to provide the birds.

“Now that corporations have invested in organics, they would like to use that label for marketing purposes, with as little encumbrance as possible, in terms of their bottom line,” Kastel said.

The integrity of organic imports is also a concern.

Following a recent Washington Post investigation, the USDA found that some soybean shipments from Turkey had been sprayed with pesticides. They were fraudulently labelled organic. The department revoked the organic certification of the Turkish company involved.

John Bobbe is executive director of a marketing group for U.S. organic producers called the Organic Farmers Agency for Relationship Marketing. He said the U.S. has become a dumping ground for questionably produced imported organics.

“There are some certification agencies we think are absolutely at fault for either turning a blind eye or being negligent about the grain that’s coming in from foreign countries,” Bobbe said.

He said he wants the USDA to hire more auditors and inspectors for imports.

For its part, the USDA said it has systems in place to ensure foreign and domestic producers meet its standards. It has suspended or revoked certification of more than 900 organic farms, ranches and businesses in the past five years due to violations — whether that’s failing to meet organic standards in the way products are grown, processed, handled or labeled.