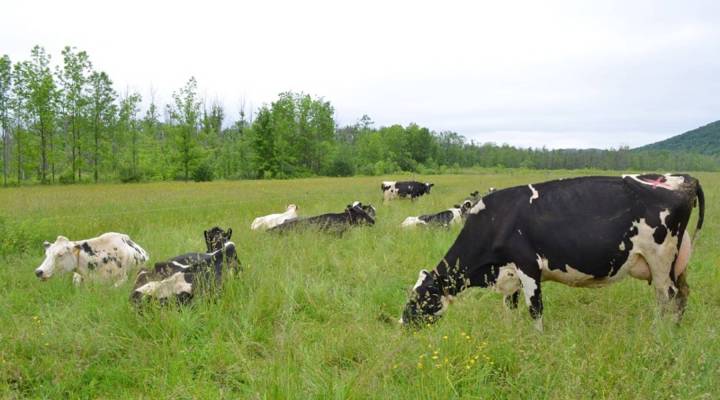 Paul and Maureen Knapp are fourth-generation dairy farmers in upstate New York.  For years, they struggled to make ends meet.

Maureen Knapp recalls thinking, “We don’t know if we can pay the help or, you know, pay the machinery bill.”

Over the past three decades, half of New York’s dairy farms have gone out of business. That echoes trends in Wisconsin and California. In a last effort to save their farms from going under, some small farmers — including the Knapps — are trying a new tactic: making the switch to organic.

“So that means, at the end of June, you collect the data and you say, ‘This is what we sold cheese for in June,’” Novakovic said. “And so then, in July, you can say, ‘Okay, Mr. Farmer, this is what I’m going to pay you for the milk that you sold in June.’”

This uncertainty — plus some extreme price volatility — put a lot of economic pressure on dairy farmers over the decades. Some dairies were bought by the farmer next door; others just disappeared.

“If you talk to some of the people that can remember back then, they’ll tell you, ‘You see that group of trees over there? That used to be a farm,’” Novakovic said.

Three hundred New York dairy farms have found another solution:  going organic. It takes three years to transition. And organic cows, which spend their days grazing outdoors, produce less milk than conventional cows. But Maureen Knapp said organic has a huge advantage: The price is determined by what consumers will pay.

“With organic, there’s a stable pay price. You know what you’re going to get,” she said.

The Knapps have a contract with Organic Valley; they make about $3 a gallon. Compare that to the $1.25 or so conventional dairy farmers have made for the past year. Paul Knapp said he hopes his dairy will be sustainable—economically and otherwise.

“Farming is something that’s in your heart,” he said. “We used to joke, ‘Between the three boys, we should get at least one farmer.’”

The Knapps would like to see their farm become a fifth-generation dairy.