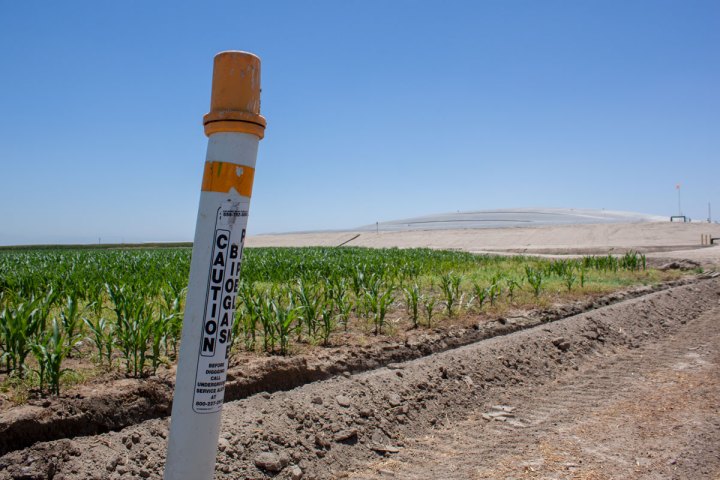 COPY
A connector channel in front of a cornfield runs to a methane pipeline. In the background, a digester captures the greenhouse gas from manure. Amy Mayer

A connector channel in front of a cornfield runs to a methane pipeline. In the background, a digester captures the greenhouse gas from manure. Amy Mayer
Listen Now

Jared Fernandes runs a dairy farm with 3,000 dairy cows that generate about 45,000 tons of manure annually. So when the state mandated that he reduce greenhouse gas emissions, like the methane released from all that poop, “you get upset,” he said.

“It’s that that brought in these companies that wanted to build these renewable fuel things,” Fernandes said.

Things like the black, rubbery dome he was walking on. It covers a pit of liquid manure and traps methane, keeping the potent greenhouse gas out of the atmosphere. Putting in a digester like this can cost about $5 million.

But all Fernandes had to pony up was some land and an agreement to supply manure — that he gets paid for. So he didn’t have to spend money. But now that he’s seen it work, he said: “I’d be willing to invest on my own.”

His methane, along with the same stuff from other dairies, is piped to a Calgren Renewable Fuels plant.

“We gather manure roughly from about 75,000 cows right now,” said Calgren’s Sarah Gonzales. She said that keeps 150,000 tons of greenhouse gas out of the air — equivalent to the annual emissions of about 30,000 cars. More dairies are joining.

“It’s been an amazing acceleration in the market and in the sophistication of all the players,” he said.