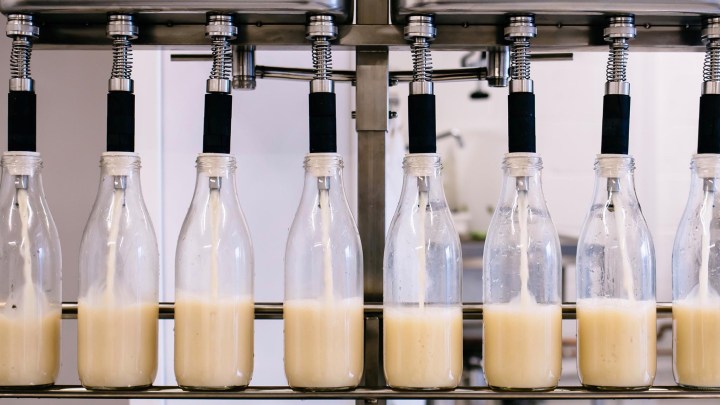 COPY
ReRooted Organic in the U.K. has been producing vegan milk for the past two years. ReRooted via Facebook

ReRooted Organic in the U.K. has been producing vegan milk for the past two years. ReRooted via Facebook
Listen Now

In March, the first national vegan milk delivery service will be coming to British doorsteps, a clear sign that veganism is on the rise  in the United Kingdom.

One opinion survey suggested that 3.5 million Brits, around 5% of the population, now identify as vegan and avoid consuming or using animal by-products.

Their motivations range from worries about animal welfare to considerations about human health and a concern that methane emissions from cattle are contributing significantly to climate change.

“I don’t think we should be impregnating cows and then taking their milk away from their babies,” he said. “We’re in the 21st century. Let’s use plants instead.”

His company, based in Totnes in the southwestern county of Devon, currently produces around 700 liters, or 1,225 pints, of both coconut and  almond milk per day in reusable glass bottles, which are delivered locally by electric van. Eckersley is confident that there is enough demand for a national service.

“Every day people are switching from dairy milk to no-dairy milk,” he said. “I think there’s a massive demand for it. The market’s opening up and what we’re moving into is a new ballpark.”

Veganism does seem to be all the rage, with the annual monthlong promotion of “Veganuary,” which encourages people to go vegan for all of January, gaining more and more recruits.

But the dairy industry is fighting back. It just had its own monthlong promotion called “Februdairy,” promoting the message that cow’s milk is healthy, ethically produced and ecologically benign. Some new  dairy farmers — like  Olly Lee — are determined to “outgreen” the vegans.

“We’ve gone for what we feel is the most environmentally friendly way of packaging milk,” Lee of How Now Dairy said. “We’re using compostable packaging.”

Lee says the pasture on which his cows graze captures far more greenhouse gases than the cattle emit. And his returnable, compostable packaging helps.

“We can spread it on our fields,” Lee said. “That compost will improve the soil health which improves the ability of the soil to then store carbon.”

Lee’s organic milk (also delivered locally by electric vehicle) is, he insists,  every bit as green as the vegan variety. And he treats his tiny herd with loving care.

“We have only 20 cows, so we know every one of them by name,” he said. “We know her mother’s name, and her grandma’s name. We know the whole lineage. I take a real pride in looking after my cows.”

In spite of the small herd, Lee is confident that when operating at full capacity his dairy will be profitable, because his milk is a premium product.