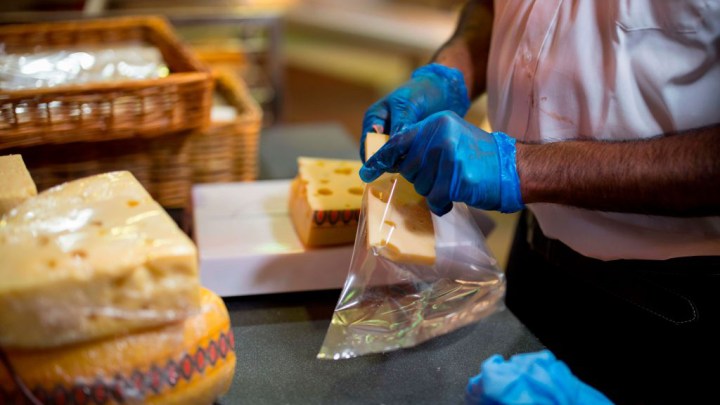 COPY
Many artisanal cheesemakers are among the small producers in the United Kingdom who plan to shrink the supply chain and sell direct. Tolga Akmen/AFP via Getty Images
COVID-19

Many artisanal cheesemakers are among the small producers in the United Kingdom who plan to shrink the supply chain and sell direct. Tolga Akmen/AFP via Getty Images
Listen Now

Like victory gardens of the World War II era, an effort is underway in the United Kingdom to rally people to save Britain’s cheese industry from collapsing under the weight of the coronavirus.

Victory in 2020 terms is less a vegetable patch, though, and more a steaming pot of fondue.

Mathew Carver, founder of London restaurant The Cheese Bar, has hosted Instagram Live streams to teach dozens of Londoners how to expertly melt down cheese, add a healthy pour of white wine and simmer until they get the perfect pot of cheesy goo.

A recent session of his was part of a three-day virtual event drawing attention to Britain’s cheese industry, which, like many, is suffering under the weight of COVID-19.

“Soft-cheese makers have a disproportionate amount of their cheese go into restaurants for cheese boards,” Hinds said. “So they had their biggest market dry up, as well as selling a cheese that doesn’t keep very long. So for those makers, it was particularly apocalyptic.”

“Our first box included three of the stock of cheese that was most at risk and needed to be sold the quickest,” Hinds said.

Stichelton, a type of British blue cheese, was one of them. Joe Schneider, the owner of Stichelton Dairy, said that inclusion saved his business.

“Neal’s Yard Dairy had expected to sell about 2,500 of those boxes in a week. They sold out in four hours,” Schneider said. “Those boxes used up 93 cheeses for us. That’s a significant amount.”

Miguel Gómez, an associate professor at Cornell University’s School of Applied Economics and Management, says the COVID-19 crisis could place a greater emphasis on direct-to-consumer sales of food from small producers — like artisanal cheese makers.

“I think those businesses are trying to be more efficient in reaching consumers because shorter supply chains are less prone to disruptions,” Gómez said.

Certainly many in the U.K. seem to be responding well to shrinking supply chains. And nearly 8,000 cheese lovers from 107 different countries participated in the three days of virtual events. Thousands on social media expressed their enthusiasm, sharing recipes and snapshots of at-home cheese creations.

Even Prince Charles shared his favorite recipe for cheesy baked eggs, proving even in a time of uncertainty and social distancing, we can all rally around the cheese board.