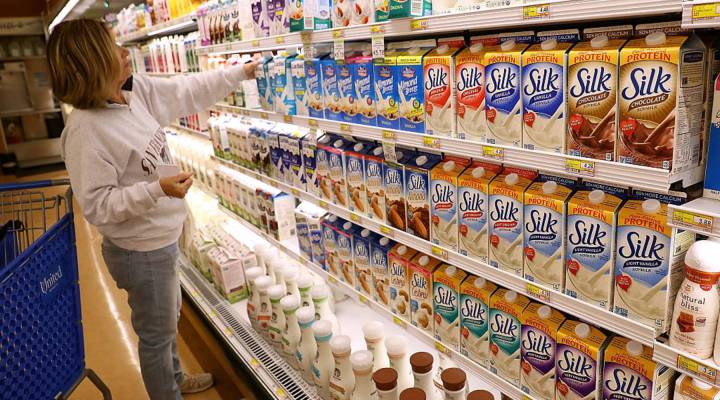 The French food and beverage company Danone is making a play to capitalize on the fast-growing organic segment in the U.S.

“WhiteWave has basically been the darling of the ‘better for you’ industry,” said Eric Gottlieb, vice president of equity research at D.A. Davidson.

Gottlieb said WhiteWave has been a big innovator in the soy and almond milk markets. And he said it’s continuing to innovate with products under its highly successful brands like Horizon Organic dairy and Earthbound Farm, which includes organic kale and strawberries.

“They’re taking their brands and bringing them to different parts of the store,” said Gottlieb.“So you’re seeing Earthbound Farms move out of the produce aisle into the frozen aisle. You’re seeing Horizon Organic move into Mac and Cheese and snacks.”

Those areas—fruits and vegetables and dairy– are key segments in the nearly $40 billion U.S. organic food market, according to the Organic Trade Association. For some, they can be gateways to organics.

“I think that foods that are closer to the farm are the foods tend to think of when they think of as organic,” said Angela Jagiello, associate director of conference and product development at the Organic Trade Association.

Jagiello said the organic food market has more than doubled between 2005 and 2015.

Despite higher production costs that come with organics, many big companies like Danone want more organics in their portfolios.

“It carries higher costs but it also commands a higher price,” said Carlos Torelli, marketing professor at the University of Illinois. “And there is less competition in the segment.”

And some of the organic products Danone will get from WhiteWave– like milk and packaged salad– are top sellers in their categories.