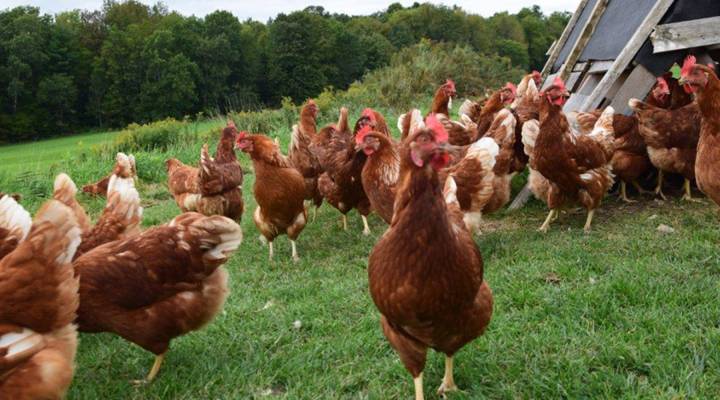 A carton of organic eggs can cost more than double the price of regular eggs — so, what are you paying for? When it comes to the treatment of livestock and poultry, there are some murky areas. Many in the organic industry pushed for a new rule, issued at the end of the Obama administration, aimed, in part, at ensuring that the green and white organic seal on the egg carton means the chickens actually spent time outdoors. The Trump administration delayed implementing that animal welfare rule three times, before proposing to get rid of it altogether. The comment period for the withdrawal of the rule ends this month, on Jan. 17.

The egg cooler at supermarkets has a wide variety of choices these days. Customers at one Ohio store can pick from: free range, cage free, or organic. “Nope, would not buy them. Just regular eggs is good,” retired factory worker Judy Wells said, as she picked up a big 18-egg carton from the bottom row. Rachel Goodrich, on the other hand, will pay more than a dollar extra for the half carton she grabbed — just six— because they’re organic eggs. One thing she expects from the organic label is that the animals will be treated well. “I’m a big animal lover, I think it’s worth spending an extra few dollars,” she said.

The U.S. Department of Agriculture administers the National Organic Program. For eggs to be certified, the hens must be fed organic feed and can’t be given antibiotics. There’s no plan to change that. But the organic industry has debated an animal welfare rule for years. So last January, as President Barack Obama was leaving office, the USDA issued a new rule. It said Organic egg producers must allow their chickens to spend time outdoors, and defines what an outdoor space should look like.

On one farm in rural eastern Ohio, it’s similar to a hen house which is set up a bit like seating in a small stadium. Along the top row are nests where the chickens lay eggs. When temperatures get above 40 degrees, the family that runs this farm opens a series of rectangular doors.

“This latch I always have open during the summertime when I’m letting them out. They can go out as they please,” said 23-year old Marie Erb, who runs this operation with her husband. The Erbs are part of a group of about 30 family farms in the region that produce eggs distributed to supermarkets in the Northeast and mid-Atlantic states. It’s organized by Pete and Gerry’s Organic Eggs, based in New Hampshire, which sees the new animal treatment rule as an important clarification to the organic standard.

Jesse Laflamme is Pete and Gerry’s CEO. He says without the change, a few producers can tarnish the organic industry. He gives the example of Herbruck’sPoultry Ranch, a major egg supplier with a huge farm in Michigan. It has added something called “poultry porches” to the barns.

Critics of this practice, like Laflamme, say they are inadequate.

“They tacked a little tiny porch on the side of them, where a fraction of a fraction of the hens might be able to go out at one time, if they could actually find their way to it,” Laflamme said.

Poultry porches are currently allowed under organic standards, but that would change with the new rule. Herbruck’s declined an interview for this story, but the company pointed to comments on the rule by the National Assembly of State Animal Health Officials, which said poultry porches help protect birds, so they aren’t vulnerable to predators and disease.

Katelyn McCullock of the American Farm Bureau Federation, a group that lobbies on behalf of farmers and ranchers, said her organization supports withdrawal of the rule, because it could prevent some of her members from using the valuable organic label. “Many farmers and ranchers had already invested in the organic system and made some substantial changes to how they did things just to transition to organics, and this would be additional hoop to jump through, and that might not be possible for all organic producers,” she said.

But a group representing the organic industry is suing the USDA for failing to put the rule into action. The Organic Trade Association says the rule was ten years in the making and has the support of its membership because it balances the expectations of organic consumers with the realities of commercial livestock and poultry production.