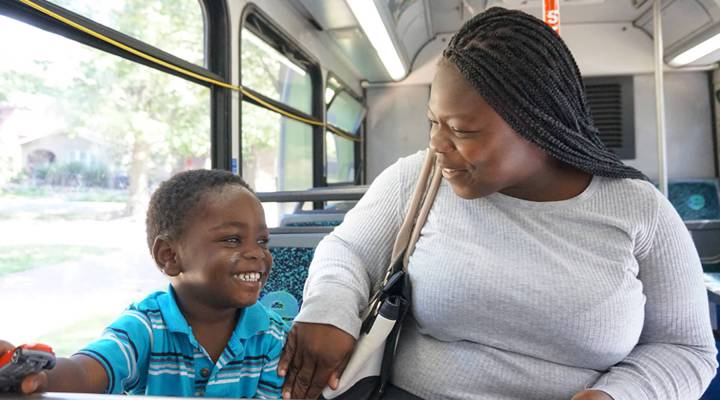 Rhonda Glover is between jobs as a home health care aide. For weeks, she’s been talking with different companies. Usually things are going well, she said, until the interviewer asks how will she get to work.

“They ask me what’s my transportation method and I say ‘bus’. It ends the interview,” Glover said. “There is no getting around it.” Employers would rather not depend on someone who depends on the bus, Glover explained.

And that makes it hard for her to work. A single mom who lives with her six young kids in Erie City, Pennsylvania, Glover said nearly all the jobs close by either pay minimum wage – just over $7 an hour, or require skills she doesn’t have.

Gary Horton knows exactly what she means. “Most new job growth is outside the neighborhood. Often outside the city,” said Horton, who heads up the NAACP in Erie. Horton is talking about jobs like home health care aides or childcare providers, where people like Glover can earn a few dollars more an hour.

“And if you don’t have accessible transportation and you don’t own a car, then you’re effectively prevented from experiencing any opportunity that may be there,” he said.

Horton also runs the Quality of Life Learning Center in Harbor Homes — it’s a sprawling public-housing project sandwiched between two corridors of what used to be bustling industry. Most of the nearly 500 families who live there, including Glover’s, are black and poor, Horton said, adding that “60 percent do not own a car.”

And the transit system got people where they needed to go easily. But now that that system stretches into the suburbs, and state and federal funds haven’t stretched along with it. So, a bus line that once covered a 30-minute loop now makes a much longer one. And low-income people are more dependent on the buses than ever, even for the most basic things. When Glover needs groceries, for instance, she gets on a bus that goes straight to the front door of the supermarket. When she leaves, she has “six bags on one arm, six bags on the other arm and three bags in each hand,” she said. And if she gets stuck at the checkout line, she may also be stuck with melting ice cream and warm milk because she missed the bus.

Glover gets a break from Erie’s bus system on days when she works at the  Quality of Life Learning Center, which is just a short walk from her apartment. She answers phones at the center as part of the community-service requirement she has to meet in order to receive cash-assistance from the state.

At the center, Glover often runs into Patreece Johnson, a housing case manager, who helps people move out of public housing by helping them find jobs. And that starts with the bus line.

“I make sure it’s on that particular bus line or it’s not too far from that bus line,” Johnson says. “If they have to walk a block or two to get to that bus line I understand that but walking seven, eight, 10, 12 blocks,” won’t work, she said.

Even when she’s at the center, the bus is never too far from Glover’s mind. She always ends her shift a few minutes early, so she can catch the bus and make it across town in time to pick up her kids at grandma’s. Then they all ride the bus back home together.

Soon, Glover will start a new a new job as a home health aide outside Erie City. And yes, she’ll be getting to work on the bus.