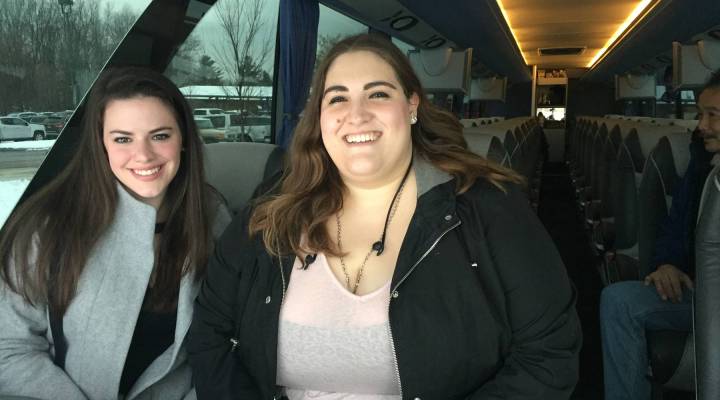 Laura Montero-Stern hates to commute by car, so she was ecstatic when her company — the medical device maker Boston Scientific — set up a bus route from her Boston neighborhood directly to the company’s headquarters 25 miles away in Marlborough.

The bus also has Wi-Fi, morning news shows on the TV and a single-serve coffee machine that makes surprisingly good java.

As city real estate prices all over the United States continue to go up, many businesses are moving to the suburbs, where there’s more space and cheaper rent than in cities. But that creates a problem for employers: how to get millennials — who increasingly don’t own cars and don’t really like to drive – to make “the reverse commute.”

That’s a problem that transportation planner Stephanie Hirshon thinks about every day.

Hirshon, who’s with the MetroWest 495 Transportation Management Association, said buses like the ones used by Boston Scientific are the best bet. But that company, with 16,00 employees, can afford plush private transport, which can cost up to $250,000 a year to lease; the little guys can’t.

Hirshon said that’s why she’s trying to get companies and office parks to pitch in a few grand each, every month, on private dedicated bus routes or vans. Or even create incentives for old-fashioned carpooling. Hirshon works with hundreds of companies in nearly three dozen communities in the western suburbs of Boston

“Over the past 15 years in this region, employers, the municipalities have not come to the table when it comes to resources for transportation. And … the employers — although the pain point hasn’t been reached yet — we’re almost there,” Hirshon said.

That pain point will be when some of the most recognizable companies in the world, like GE Healthcare, IBM and Raytheon, won’t be able to attract workers — especially young workers – because there’s no practical way to get to the office from the city without a car.

“Virtually the entire transportation system in the United States is designed around getting people downtown,” said Yonah Freemark, a Ph.D. candidate in city planning at MIT.

He said that was for obvious reasons. Downtowns are hubs, and there just isn’t the same density out in the suburbs. But Freemark said the hub system has become dated.

“For several decades now the majority of jobs in every metropolitan area in the United States, including Boston, have been outside the city itself, so most jobs are actually in the suburban areas,” he explained.

And so, he said, it behooves planners to figure out how to move people around, both to the suburbs and within the suburbs. Which is why Hirshon is pushing so hard for commuter vans and carpooling in addition to dedicated buses.

There are other city planners pushing for another way to get young folks to work in the suburbs: entice them to live there.

Jessica Strunkin sits at a Starbucks in a new shopping complex that also has a Whole Foods supermarket and fancy apartments above the shops that aren’t that much cheaper than what you’d find in Boston. Strunkin is with the 495 MetroWest Partnership, a public-private consortium to spur development and growth in the region. She admitted that this “mixed-use concept” is not new in other parts of the country, but towns like Shrewsbury in suburban Massachusetts are just catching on — mainly to lure the ever-popular younger demographic.

“Now you have more housing near the downtown, as well as this mixed-use shopping with restaurants and other amenities that people can actually walk to. And there are sidewalk systems to accommodate them,” she said.

A sidewalk to downtown may be appealing, but back on the Boston Scientific commuter bus, Jennifer Fusco said cities are still a young person’s best friend.

“At night time my friends like to do trivia or go somewhere fun to brunch and all the good spots are in the city. And it’s nice to not have to drive.”

For now, companies are just hoping that people like Fusco, who aren’t thrilled about driving, are willing to get on the bus.