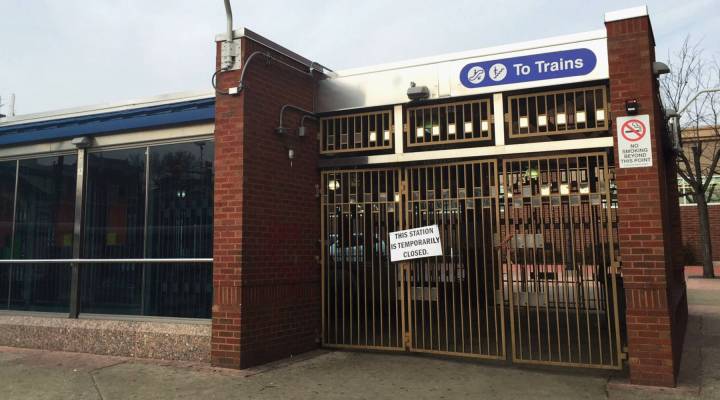 COPY
The Penn-North Metro Subway Station in West Baltimore is among those closed for emergency track repairs. Amy Scott/Marketplace

The Penn-North Metro Subway Station in West Baltimore is among those closed for emergency track repairs. Amy Scott/Marketplace
Listen Now

At the Reisterstown Plaza Metro station in Baltimore, loudspeakers were blasting WTTZ, the Maryland Transportation Channel. Yes, the Baltimore Metro has a radio station. But today, and for another few weeks, there is no subway service. On Feb. 11, the Maryland Transit Administration announced it would shut down the city’s only subway line for a month to make emergency track repairs.

Habib Malik, 64, stood on the curb, waiting for one of the free shuttles the MTA has arranged during the repairs.

“Getting back and forth to work is kind of difficult because we don’t know what time to come out here to catch the bus,” he said. He wasn’t even sure where the shuttle would stop.

Malik gave himself an extra hour for a trip that normally takes seven minutes. That morning, Dayshia Bunting, 20, was a half-hour late to her job at Burger King.

“They were understanding because they know the train is down right now, but I’m missing out on money,” she said.

Transportation headaches are nothing new in Baltimore. Last spring, the city revamped its bus system with new routes designed to be more efficient and reliable.

“We had the same exact problem, where everybody was confused, they didn’t know what bus to catch, and then they’re raising the prices on top of that,” Bunting said.

“What we’re looking at in Baltimore is systematic, gross, underinvestment in the transportation system,” said Samuel Jordan, president of the Baltimore Transit Equity Coalition, an advocacy group.

Even when the Metro is running, research from the Brookings Institution has shown that nearly two out of three jobs in the region can’t be reached by public transportation within 90 minutes. Jordan calls the uncompensated time spent on a bus stuck in traffic or waiting to transfer “transit detention.”

“Our calculations show that at minimum the economy is losing $325 million a year just in transit detention,” he said. “The burden is borne always by people of color, low-income and households that don’t have access to cars.”

“I ended up having to fire good employees who wanted to work because they couldn’t get to work on time,” he said.

Rouse helped found the advocacy group Transit Choices to push for a better system. He pointed to a 2015 Harvard study on upward mobility in the United States.

“It showed that the No. 1 obstacle for people rising out of poverty in this country was neither poor education or crime, but poor public transit,” he said.

Rouse said the new bus system will work better for Baltimore when the MTA installs GPS tracking and tackles worker absenteeism. When the subway line is working, it’s one of the more reliable ways to get around.

“We are making record investments in transit right now and we will continue to support those improvements,” Rahn said. “We’re very much aware that there are many people who depend upon transit as their mode of getting around.”

But the sudden subway shutdown has left those who rely on it, like Bunting in Northwest Baltimore, feeling neglected.

“This area doesn’t make a lot of money, so I feel like they tend to leave us out of a lot stuff,” she said. “They don’t really care.”

A coach pulls up on the other side of a six-lane street. She and the others, hoping it’s their bus, make a run for it. Subway service is expected to resume in mid-March, but another shutdown to repair worn tracks is scheduled for August.