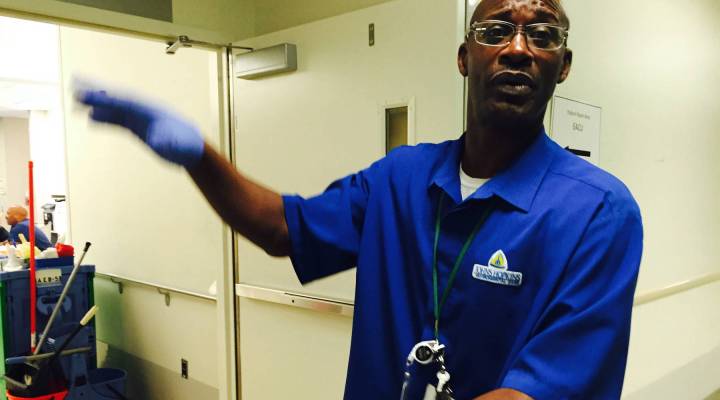 In a basement supply room at Johns Hopkins Hospital in Baltimore, William Glover-Bey gathered a radio, dust mop and gloves. It was 11 p.m., and he was preparing for the overnight shift, cleaning floors in the emergency department.

Glover-Bey, 59, was coming up on a year in the job. He’s trained as a drug addiction counselor, but he had been out of work for two years before landing here.

“When I got here, it was amazing how many people seemed to be angry,” he said. “I’m excited about working.”

Glover-Bey said he’s happy to be making just under $12 an hour cleaning floors, because when he was younger, he spent more than 15 years in prison, mostly for selling drugs. He’s one of 174 people hired by the hospital last year as part of a program to bring in ex-offenders.

“My mindset is, because I’ve been to jail and I’ve worked and done long jail hauls for $6 a month, do you think I can’t do this here for whatever they pay us a day?” he said. “No, this is easy.”

Hopkins wants to create opportunities for more people like Glover-Bey through a broader initiative called HopkinsLocal, announced last fall. The goal is to award more construction and purchasing contracts to local women and minority-owned businesses, and to have 40 percent of new hires for certain entry-level jobs come from neighborhoods with high unemployment and poverty.

“The 40 percent target has focused on those neighborhoods, by ZIP code, within the city that we regard as most distressed,” said Ronald Daniels, president of the university.

Under a new screening process, applicants from those ZIP codes get a guaranteed look. If they’re qualified, their resumes will be passed on to hiring managers. The targeted jobs include “everything from entry-level technicians to people working in custodial services and catering,” Daniels said.

The program was in the works long before Freddie Gray, a young black man, died in police custody a year ago. The protests and violence that followed exposed the deep racial and economic inequality in the city, Daniels said, and made the need more urgent. Last month two dozen more employers — including Under Armour, T. Rowe Price and the local power company — joined the effort, now known as BLocal. Daniels is co-chairman of the $69 million initiative.

“It’s not a comprehensive solution,” he said. “It’s not going to touch the vast majority of the unemployed in Baltimore, but it represents an important statement of how we think about making our city stronger.”

Johns Hopkins has a complicated legacy in the city. The largest private employer in the state, the university and health system brought in $10 billion in revenue last year. In contrast, many of the neighborhoods near the university and its hospitals are plagued by high unemployment and crime.

“Baltimore has always had a kind of love-hate relationship with Johns Hopkins, especially in the neighborhoods immediately surrounding the hospital,” said Richard Clinch, director of the University of Baltimore’s Jacob France Institute, which studies workforce and economic development in the region.

In recent years, the hospital and its partners have been criticized for a massive urban revitalization project that displaced many African American residents without delivering as many local jobs as promised. Relations have improved, Clinch said, but it won’t be easy to fill the new jobs with the people who most need them. In impoverished neighborhoods, many people have criminal records, never finished high school or lack reliable transportation.

“The residents of Baltimore face many workforce challenges, and not many of them are ready for the types of jobs that are being created,” Clinch said.

Ashley Colon, 24, was hired at Johns Hopkins Bayview Medical Center as part of an initiative to bring jobs to neighborhoods considered “distressed.”

One of the people who has been hired since the program started January is Brittany Furgal, an administrative coordinator at the Johns Hopkins Bloomberg School of Public Health. In her ZIP code, almost half the adults aren’t working, and the poverty rate is 37 percent, according to the Economic Innovation Group’s Distressed Communities Index, but Furgal lives in a more affluent pocket, a stone’s throw from the Inner Harbor tourist district.

Asked if her neighborhood felt distressed to her, she said, “No, and I just moved here in September, so I’m new to Baltimore completely.”

Furgal, 26, is not representative of the disadvantaged communities Hopkins is trying to help. White and college-educated, she moved here from Albany, New York, after the riots.

“Even though I wasn’t affected by it and I wasn’t here at the time,” she said, the hiring effort “still helps the community as a whole.”

Ashley Colon, 24, grew up in Baltimore in a middle class, Puerto Rican-Italian family. She already had a similar job when she was hired to help check in cancer patients at Johns Hopkins Bayview Medical Center. The new job was much closer to her neighborhood.

“Right now I wouldn’t consider it as distressed, but it used to be,” she said. Recent redevelopment has made the area south of the Bayview campus feel “safer and quiet,” she said.

The hiring program is still being developed, said Johns Hopkins spokesman Jason Kravitz, and of the dozens of people who’ve been hired from distressed ZIP codes since January, he said the majority are underrepresented minorities. The university plans to report its progress every year.

The city has training programs to prepare residents for entry-level construction and biotechnology jobs, and Hopkins is working with neighborhood groups and job readiness programs to recruit workers.

One of those groups is Turnaround Tuesday, at Zion Baptist Church in East Baltimore. Every Tuesday dozens of people get together in the church basement to learn skills like interviewing and communication, and to hear a little preaching from pastor Marshall Prentice.

“When you all are working, we’ve got to have this room filled with another group just like you so we can do it again,” Prentice told participants on a recent Tuesday.

“I believe that this BLocal hiring is a commitment that truly will change our community for a long time,” he said.

It was Turnaround Tuesday that helped William Glover-Bey find his job at Johns Hopkins, making what he calls a “living wage” to help support his five children.

“Could it be better?” he said. “Yes, but if you are ambitious enough, you look for advancements.”

With his background as a drug counselor, he’s planning to apply for one of hundreds of new jobs in the city doing health outreach in distressed neighborhoods.

“I’m a networker by nature,” he said. “My resume speaks volumes.”