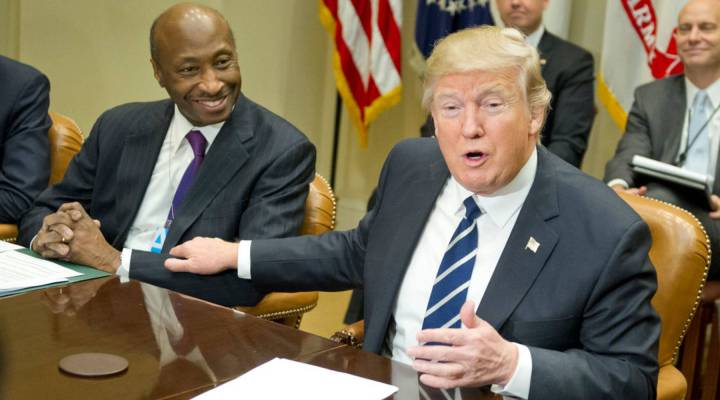 COPY
President Donald Trump meets with Kenneth C. Frazier, Chairman and CEO of Merck & Co. (L) and other representatives from PhRMA, the Pharmaceutical Research and Manufacturers of America, in the Roosevelt Room of the White House on January 31, 2017 in Washington, D.C. Ron Sachs - Pool/Getty Images

President Donald Trump meets with Kenneth C. Frazier, Chairman and CEO of Merck & Co. (L) and other representatives from PhRMA, the Pharmaceutical Research and Manufacturers of America, in the Roosevelt Room of the White House on January 31, 2017 in Washington, D.C. Ron Sachs - Pool/Getty Images
Listen Now

NEW YORK (AP) — The CEO of the nation’s third largest pharmaceutical company resigned from a manufacturing council that advises President Donald Trump days after racially tinged clashes in Charlottesville, Virginia, citing “a responsibility to take a stand against intolerance and extremism.”

Trump, who is under increasing pressure to explicitly condemn the white supremacist and hate groups involved, lashed out almost immediately Monday at Merck CEO Kenneth Frazier on Twitter, saying that because of the resignation, the pharmaceutical executive “will have more time to LOWER RIPOFF DRUG PRICES!”

Drugmakers have come under closer scrutiny because of rising drug prices, though Merck has not been one of the companies targeted by lawmakers or watchdog groups.

Frazier, who is African American, said in a tweet on Monday that the country’s leaders must “honor our fundamental values by clearly rejecting expressions of hatred, bigotry and group supremacy.”

One person was killed in the protests after a car slammed into a crowd and multiple people were injured in that incident and in running clashes between white supremacists and those opposing them.

Frazier is not the first executive to resign from advisory councils serving Trump.

Tesla CEO Elon Musk resigned from the manufacturing council in June, and two other advisory groups to the president, after the U.S. withdrawal from the Paris climate agreement. Walt Disney Co. Chairman and CEO Bob Iger resigned from a White House advisory council for the same reason.

The manufacturing jobs council had 28 members initially, but it has shrunk since it was formed earlier this year as executives retire, are replaced, or, as with Frazier, Musk and Iger, resign.